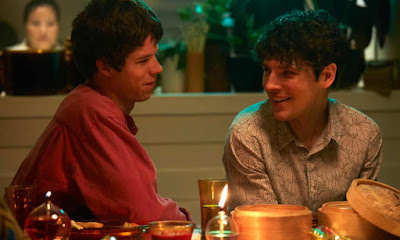 BENJAMIN is an autobiographical romantic dramedy from writer-director and British comedian Simon Amstell.  Set in contemporary London, the title character is one-time feted young film director filled with anxiety about his second feature, and too scared to receive the love that young singer Noah is offering.  It's a strange mix of awkward British dating and soft satire on the media types the cling onto the indie art scene.  I found the rom-com bizarrely uninteresting. Maybe this is because Colin Morgan (most recently seen as Bosie to Rupert Everett's Wilde in THE HAPPY PRINCE) gives a very low-key performance.  So much so that in early scenes the combination of his Northern Irish accent, anxious mumbling, and the background noise of the nightclub scene meant I was struggling to follow what was happening.  In fact that this sort of indifferent lighting and direction stretches to the rest of this presumably very low budget film.  On the other side of the romance Phenix Brossard's Noah is similarly a bit of a one-tone fantasy waif. In the words of Benjamin's best friend Stephen (a scene stealing Joel Fry - Game of Thrones' Hizdahr), Benjamin just likes boys who are "well lit and weak".  If that's not your thing, this may not be your thing.  And so the movie wends its way along its slight running time at a slow ambling pace.  There's an attempt at satire, mostly in a cameo from Game of Thrones' Ellie Kendrick as a dancer.  It's funny but it's no Nathan Barley.  All in all, this film is highly missable.

BENJAMIN has a running time of 85 minutes and is rated 15 for very strong language and drug use.  The film played the BFI London Film Festival 2018 and is now on release in cinemas and on demand in the UK and Ireland.
Posted by Bina007 at 06:00