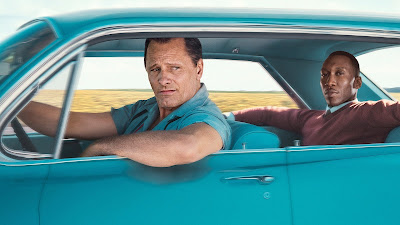 I started watching GREEN BOOK minded not to like it. Sure, I think both Viggo Mortensen and Mahershala Ali are fine actors, and I love biopics. But I had been awed by Spike Lee's BLACKKKLANSMAN and swayed by articles arguing that GREEN BOOK's more old-fashioned anodyne depiction of 1960s race relations was regressive and worse still potentially racist. How could the story of an incredibly talented African-American musician be centred on the story of his white driver?  Wasn't this just another tale of a white person coming to enlightenment at the expense of a wise black side-kick?  Wasn't this THE HELP, or DRIVING MISS DAISY?  All of this criticism was heightened when GREEN BOOK surprisingly won Best Picture at the Oscars, ahead of BLACKKKLANSMAN, THE FAVOURITE or even ROMA. Wasn't this just another example of the Oscars proving themselves to be old fashioned and out of touch?

Well yes and no. Is GREEN BOOK better than the BLACKKKLANSMAN? Clearly not. That is a movie that balances comedy and righteous anger with such perfection and fury that it sears the imagination.  But GREEN BOOK *is* a handsomely made, more delicate film, that in its suspiciously easy rhythm hides a rather subversive look not just at race relations but also homophobia. It's beautifully acted and constructed, incredibly watchable, and really quite lovely.

Mortensen plays real life Italian-American nightclub bouncer and all-round swaggering macho-man, Tony Lip. (Interestingly the real life Tony turned up as an actor in THE SOPRANOS many years later.) Down on his financial luck, he takes a job chauffering Dr Donald Shirley (Ali) on a tour of the deep south.  It is made very clear to Tony that he's not being hired for his driving skills - Shirley's management expect racial violence in the South and need Tony's muscle. And so what develops is a really lovely and convincing odd-couple buddy road movie. Tony's rough, crude manner is contrasted with Shirley's courteous, gentlemanlike manner.   Over time, Tony becomes less racist, although it seems like he was already rather pragmatic on the issue of homosexuality.

I rather like the delicate way in which profound issues are handled.  The risks attendant on Shirley's homosexuality are handled in a single scene, and seeing Ali cowering naked in a bathhouse conveys so much so swiftly.  I also like the way in which Shirley's conflicted position vis a vis his own race is portrayed: like Nina Simone he is more comfortable in the world of classical music but forced to play popular music because that's what the market expects of him.  Moreover, Shirley defies all racial stereotypes much to Tony's disappointment, but also earning him the mistrust of his fellow African Americans. I even like the way in which the movie shows the differing styles of racism across America.  It may have been more explicit in the South - with bars on entrances, where you can eat, where you can sleep, whether you can be out after dark. But that doesn't mean that the north is a nirvana.  The subversive racism - the epithets, the subtle refusing to drink from a black man's cup - it's all still there.