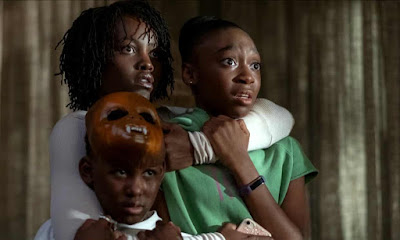 I loved loved loved Jordan Peele's horror-satire GET OUT.  Everybody did.  And we were all hot with anticipation for his new film, US, already allegorical in its title, expecting a damning indictment of contemporary US racial politics. What we get is a film that is visually interesting and full of cinematic references, but less tightly controlled and messaged than GET OUT, far less scary and far less funny.  In fact, I would go so far as to say that it's a noble failure. Because if a horror film can't scare me - a notorious wimp when it comes to this stuff - then it's a failure. And perhaps more importantly, it really fails for me as a politically provocative film. It feels as if Peele was throwing a few ideas against the wall - or maybe the film started out as saying one thing on the first draft but then  ended up being rewritten to try and say another on successive drafts - that it feels ill developed, or maybe over-developed.  Too many of its key visual images don't really go anywhere for me.

So let's wind it back.  The film begins with a flashback to mid-80s America where a young African American girl gets lots inside a funfair hall of mirrors and emerges never quite the same.  It's also the time when America is engaging in its ill feted "Hands Across America".  As someone contemporaneous with lead character, I only vaguely remembered this, and I wonder how far modern viewers will know or care about this apparently pivotal but to my mind ill-chosen metaphor. Fast forward to the current day.   The little girl has grown up to be the mum in a middle-class black family going on holiday to that same coastal resort. They appear to be the victims of a home invasion horror by a family of doppelgängers. Incompetent doppelgängers at that.  And then they realise that it's not just them but everyone in America. Because a bunch of "tethered" doppelgängers previously populating America's hidden underworld of prison cells and tunnels has staged a rebellion.  Of course there's a final act twist but when you figure out half way through who is and isn't getting killed quickly it's pretty obvious what that is.

So here are some of the things that I thought the film might have been trying to say. At first I thought, maybe the doppelgängers are there to remind a gentrified black family about their roots and essential blackness rather than living a life of boating.  And then I thought, ok the trapped bunnies are slaves, and the tunnels are like the underground railroad. But then white people were being stalked too so I thought ok so not so much about racial politics? And then we got all this weird shit about "god invented this system and then ran away" and  I was like ok this is some Nietzchean god is dead everything is permitted shit. In the end I didn't really care. And I wasn't scared.

Have an idea. A good simple scary idea. And see it through.