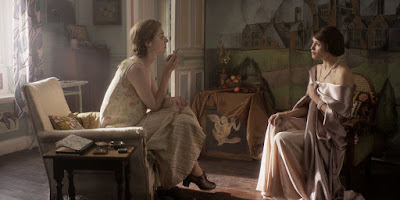 VITA & VIRGINIA is a beautifully crafted film about the love affair between Virginia Woolf and Vita Sackville-West that inspired the former's wonderful fictionalised fantastical biography Orlando, and the stunning film that launched Tilda Swinton's career. Indeed for many people, including myself, that film and the book may be our only knowledge of Vita, making this film a fascinating and unusual tale.

The first thing to say about the film is that the script, based on her own stage play, by Eileen Atkins, is very good, and serves to describe why Vita was so fascinating and larger-than-life, and just how dangerous and transformative that love affair was to someone as mentally fragile and hyper-sensitive as Virginia. The film implies that the married Virginia was hitherto frigid and that the pansexual promiscuous Vita was her first successful lover.  They truly loved each other. But Vita simply does not have it in her to be in love with one person at a time, and this revelation ruins but then liberates Virginia.

The second thing to say is that the film looks marvellous, despite its presumably slim budget. Shooting on location at Knowle House helps, but so does the dreamy cinematography, the stunning wardrobe - particularly for Vita and her mother - contrasted with Isobel Waller-Bridge's anachronistic score. I loved just looking and hearing this film. I also loved director Chanya Button's attempts to lightly use CGI to take us inside Virginia's imaginative world.

What I didn't love - and what ultimately drew me out of the picture - was the way in which Elizabeth Debicki and Gemma Arterton as Virginia and Vita respectively used very arch period English accents for their roles. It felt so studied and performative and rehearsed that maybe a more naturalistic upper class English accent might have been less intrusive.  Given that the director went for a radical use of music I was surprised she didn't give her actresses notes to be more naturalistic here too.

The result of feeling somewhat alienated from my lead actresses is that I was far more drawn to the other characters. Isabella Rossellini is absolutely magnificent as Vita's society matron mother - conveying with a withering look more contempt than a screen can hold!  More seriously, I found the two cuckolded husbands far more fascinating than their wives.  Peter Ferdinando (HIGH RISE) was just unbelievably sympathetic as Leonard Woolf - the  marvellously supportive husband who just wants to keep Virginia safe - from herself as well as Vita - to enable her writing - and to make her happy.  And the most fascinating character of all is Rupert Penry-Jones' Harold Nicolson - the bisexual diplomat who loved his wife enough to give her her sexual freedom (as he also demanded) so long as she only loved him. It's an absolutely tragic portrait of a modern relationship in which love is not conditional on sexual but emotional fidelity.