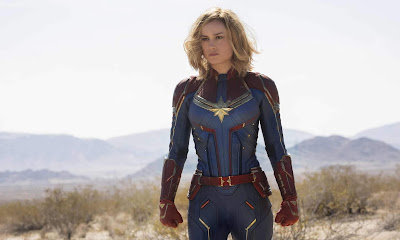 CAPTAIN MARVEL is a game of two halves. I found the first half of the film utterly tedious, failing to fire with its buddy comedy and alien politics, but the second half to be really moving and powerful and wonderful.

The film starts with Brie Larson (ROOM) playing a human with superpowers and amnesia, being trained by a beefed-up Jude Law to fight as part of a Kree special forces unit against their hated Skrull enemy.  She crashes to earth sometime in the mid 1990s - well before the events of the current Marvel series - and tries to uncover the mystery of how she got her powers with the help of a friendly government agent called Nick Fury (Samuel L Jackson) and her old best friend Marie Rambeau (Lashana Lynch).  Turns out she was a kick-ass fighter pilot called Carol Danvers working for an inspirational woman called Mar-Vell (Annette Bening) who - turns out - was an alien who invented the original tesseract - a kind of super-energy source McGuffin that has wound its way through these films. And so Danvers and her sidekicks have to protect the tesseract from - they think  - the evil terrorist Skrull - especially their leader Talos played by Ben Mendelsohn in full evil villain guise.

Like I said - the first hour of this film seemed pretty tedious to me. I don't really engage with CGI filled alien planet fight scenes, especially when I don't care about either side. I also didn't really care about the early scenes on 1990s Earth other than some pop tune nostalgia.  I could see that the directors wanted to create a kind of buddy movie road-trip odd-couple comedy between Carol and Fury but I just didn't respond to it. I could see Samuel L Jackson trying to be funny but didn't laugh - and it didn't feel like anyone else in the cinema was laughing either.

Where the film began to ignite for me was in its second half, broadly where we get a major plot twist regarding one of the characters. This allows that character to actually become the one driving the witty deadpan humour and the heart of the second half of the film.  I also really loved the relationship between Carol and Marie - which also takes place in the second half of the film. In fact, you could easily have played it as a gay relationship co-parenting a child, and I wonder if this film will achieve cult status on that level.

Finally, its in the second half of the film that a lot of the feminist groundwork done in the first half pays off - it's where we see Captain Marvel as a hero who's main skill is obstinacy in the face of bigotry. She doesn't need a wise male mentor to give her advice or permission. She doesn't have a crisis of confidence. And she doesn't have a love interest (male or female apparently).  She just gets the job done, no mess, no fuss. This is refreshing in its straightforward empowerment but does make Captain Marvel a fairly unengaging superhero. She's the strong smart ethically grounded woman who basically never does anything wrong, never has any doubts, and doesn't really need her friends. Accordingly, it's no surprise that the MVP of this film is a cat.