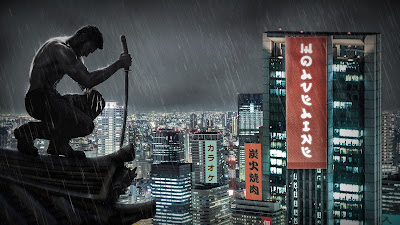 To listen to the podcast review of this film, listen here, or subscribe to Bina007 Movie Reviews in iTunes.


Hugh Jackman's latest outing as THE WOLVERINE is a pleasant surprise - a summer superhero blockbuster that is brooding without being portentous;  has a killer action sequence without being one loud thing bashing into another; has a plot that's twisty but also makes sense; has female characters that can kick ass without getting their kit off; and has a sense of humour without being dominated by the persona of the star. As a result, it feels like a far more balanced and easily enjoyable watch than MAN OF STEEL, STAR TREK INTO DARKNESS or IRON MAN 3.

The story starts where the last X-MEN movie ended: Logan/Wolverine is grieving for Jean Grey, and hiding from his superhero nature in the Yukon.  Still, he's too good a man to resist a damsel in distress, and when summoned to Tokyo to meet the dying man he once saved, he ends up becoming the protector of his beautiful grand-daughter Mariko.  She's being hunted by the Yakuza, intimidated by her father, and sleazed on by her politician fiancé.  And as the movie unfolds we discover why she's so valuable, and why Logan suddenly can't self-heal.

This is perhaps the most interesting part of the story - and allows Jackman to play Logan in an emotional range that has hitherto been denied him.  I've always found Jackman the perfect embodiment of the character, and watching him perplexed by his mortality, but also drawn to it, is fascinating.  In fact, it struck me that his character in this film is not so different to Jean Valjean in LES MIS - a man with a big secret identity and a strange strength, who appears on screen bearded, desperate and struggling with whether he should embrace that identity, and how best to seek justice.  That said, Jean Valjean was not as cut as Logan!  Hugh Jackman has said that he finally had enough time to train for this role and to create the body that he felt the Wolverine should have, and boy does it show!

It's also worth mentioning the fact that the plot of this film, based on an initial script by Christopher McQuarrie (THE USUAL SUSPECTS) feels a lot more like a Bond movie than a conventional X-MEN film, perhaps because it focuses on one hero, the girl he's trying to save, and a classic evil supervillain in the form of Svetlana Khodchenkova's brilliantly camp Viper.  We even get the classic third act showdown in a super-lair.  The negative aspect of the Bond-like script is the childish simplicity of the two plot twists which any fool will guess about an hour before they are revealed.

Behind the camera, James Mangold does a fantastic job as director - and given his CV of directing character-led dramas like WALK THE LINE, the action sequences are surprisingly good. The bullet train fight sequence is particularly impressive, but I also liked the imagery of Logan as a kind of Saint Sebastian in the third act, as well as the fact that Mangold makes sure that both female leads - even the simpering love interest - have some fighting chops and are never gratuitously shot in their bikinis (JJ Abrams, I'm looking at you!)  The  one negative thing is that the addition of 3D in post-production adds nothing to the movie, other than an extra few dollars to the ticket price.