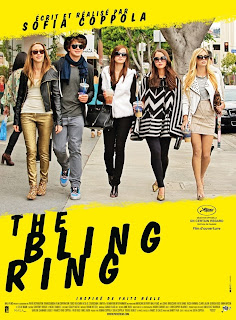 So here's my ten minute review of Sofia Coppola's new film, THE BLING RING, based on the true story as covered in Vanity Fair magazine.  It's a really scary, zeitgeisty flick about young rich kids so badly parented and so obsessed with reality TV and celebrity that they aspire to live that lifestyle, even if means casually robbing celebrity houses to get the labels.  Sofia Coppola's take on the story is straightforward and leaves us to make our own judgement about both the kids, their parents and our own complicity in turning them into pop culture phenomena. It's a less auteur film than SOMEWHERE but is visually superb and features a great performance from Emma Watson.
THE BLING RING has a running time of 90 minutes and is rated R in the USA.
THE BLING RING played Cannes 2013 and opened in June in the USA, Belgium, France, Australia, Sweden, Croatia, Israel, Canada, Poland, Bosnia, Hungary, Russia, Finland and Lithuania. It opened earlier this month in the Philippines, Kuwait, the UK and Ireland. It opens on July 12th in Denmark and India, on July 19th in Macedonia and Estonia, on July 26th in Mexico. The movie opens on August 1st in Argentina, the Netherlands, New Zealand and Brazil; on August 8th in Australia and Portugal; on August 16th in Germany and Romania; on September 6th in Norway; on September 12th in Peru and on September 19th in Italy.
Download the MP3 here.
Posted by Bina007 at 11:26