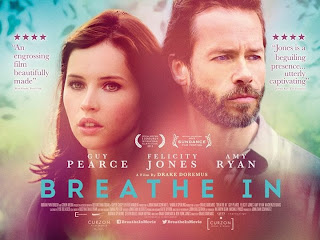 For a written review of the film, read on, but for a podcast review of this film, you can either listen directly here, or subscribe to Bina007 Movie Reviews in iTunes.

Arthouse director Drake Doremus scored a critical smash with his 2011 romantic drama, LIKE CRAZY.  With its handheld DV shooting style, semi-improvised script, and willingness to show the highs and lows of young romance, the movie struck most critics with its fresh authenticity. I, on the other hand, found it precious and irritating.  Doremus' follow up is this new drama, BREATHE IN, which has received far less critical acclaim. I liked it more than LIKE CRAZY, but still not enough to recommend it.
The plot is conventional and hackneyed.  A pretty young girl enters the lives of a dissatisfied middle aged couple, and an affair with the husband throws their emotional lives out of kilter.  In this case, the girl is Sophie, a music prodigy exchange student from England, and the husband is Keith, a man who dreams of an artistically valid life, but is condemned to teaching music in up-state New York to fund his conventional existence.
What gives this movie merit is that Doremus and co-writer Ben York Jones, eschew the typical pyschodrama - making it very clear that neither Keith (Guy Pearce) nor Sophie (Felicity Jones) have dodgy intentions, and that their connection is earnest and beautiful. In fact, the film-makers even create a small role for Kyle MacLachlan as the conventional sleazy older man, to point out how far Keith does not fit that cliché.  But that mature approach has its own pitfalls.  It makes for a movie that's all longing glances and undeclared affinity, but there's little erotic tension or passion or, well, drama. And when the conventional genre structure demands a melodramatic cathartic denouement - let's just say it feels artificial and at odds with the tone of the rest of the movie.
So, overall, BREATHE IN is a disappointment thanks to it's rather thin plot.  The photography is beautiful.  The acting is great - nuanced, subtle, mysterious - and I even loved newcomer Mackenzie Davis as the errant father's teenage daughter.  But the movie just felt like it had too little meat on its bones.  If you want to watch something with more substance, but covering a similar theme, why not check out another Sundance alum: Ry Russo-Young's stunning NOBODY WALKS?
BREATHE IN has a running time of 98 minutes. It has been rated 15 in the UK for strong language. It played Sundance 2013 and is currently on release in the UK and Ireland.  It will be released in the Netherlands on November 7th. It does not yet have a release date in the USA.
Posted by Bina007 at 21:53