A FIELD IN ENGLAND 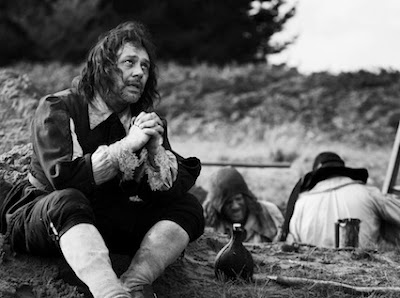 Rounding out our Ben Wheatley retrospective, we come to his latest release, A FIELD IN ENGLAND.  This was remarkable for being the first British movie to be released simultaneously in the cinema, on TV and on demand.   I completely understand why Wheatley was in favour of this type of release. Going for a TV and OD release means that his film will be seen by far more people, and generate far more buzz, than with a conventional limited art-house cinema release followed at a distance by a DVD release. It's also another sign of the trend wherein TV and cinema have merged. In the old days, there was a snobbery about quality work being put out in cinemas, and TV being of lesser quality.  But now, with the HBO-isation of TV, we can see long-form drama of infinitely higher quality than shitty genre films, and budgets per minute that match anything Hollywood has to offer.  We're rapidly coming to a place where cinema, TV, ipads and phones are just media on which the content is delivered, and the hierarchy between them is being dissolved. To be sure, for any beautifully shot visual work, the bigger the screen the better, and there's always something to be said for the group experience, but modern life doesn't allow for the reverence of the movie theatre.  The common sense solution is simultaneous release.  To be sure, I'd urge you to watch visually arresting movies like A FIELD IN ENGLAND on a big screen. But if you don't live near an art-house cinema, that you can watch on its "opening weekend" is fantastic, even as the significance of that moniker in a Netflix mega-release world diminishes.

All of which is pre-amble to the review of the actual film, which is remarkable for its content as much as for the method of its release.

The movie is set in the mid seventeenth century, during the English civil war - a period of history much under-filmed.  As the film opens, we meet a motley crew of deserters - Whitehead, an alchemist, fleeing his master, Trower, and Jacob and Friend, two deserters being marshalled by Cutler.   They amble about in a comedy of manners - the crude deserters making jokes about constipation and searching for an alehouse, while Whitehead asserts his delicate intellectual superiority.  The crew then come across the enigmatic O'Neill who, broadly speaking, asserts his authority, gets the group high on magic mushrooms, and forces them to dig for some unspecified, potentially magical, treasure. And then, in classic Ben Wheatley style, it all goes horribly, sickeningly wrong.

For his fourth feature, Wheatley once again does something utterly different. After the domestic gangster flick that was DOWN TERRACE, and the cultish horror of KILL LIST, and the very darkly funny SIGHTSEERS, we get a period, black-and-white, cultish, trippy horror movie that defines all genre conventions.  A FIELD IN ENGLAND has elements of all of Wheatley's previous films.  We've got darkly funny comedy - jokes about constipation and nagging wives  - we've got a fascination with the mythic pagan magic of the English countryside - and we've got the seemingly banal slip into the bonkers and then finally the truly frightening.  And in terms of the formal direction, while this movie is in black and white, in period costume, and shot in a single film, A FIELD IN ENGLAND retains the elegant framing of DP Laurie Rose - arresting images that stay with us long after the movie is over - and ellipses that jolt us - in this movie, living tableaux.

My view is that A FIELD IN ENGLAND is Wheatley most formally imaginative and daring film, and the visuals and sound mix are stunning.  There's a seen with a man being harnessed and driven like a horse that's as horrific as anything more graphic later in the film.  I love the casting of Reece Sheersmith, of A LEAGUE OF GENTLEMEN fame, as Whitehead, and Wheatley regular Michael Smiley as O'Neill. And I love some of the early dark humour:

Friend: You think about a thing before you touch it, am I right?
Whitehead: Is that not usual?
Friend: Not in Essex.

A FIELD IN ENGLAND was released simultaneously in cinemas, on demand, and on TV on July 5th. It has a running time of 87 minutes and is rated 15 in the UK for strong language, one occurrence of very strong violence and gory images.

A podcast review of this film is available directly here, and by subscribing to Bina007 Movie Reviews in iTunes.