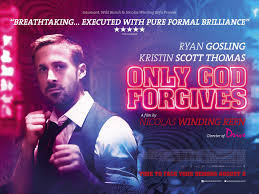 The plot is almost impossible to spoil - the movie is all concept and very little development. In a highly stylised but contemporary Bangkok an American crime family falls foul of a Thai cop cum avenging angel called Chang (Vithaya Pansringarm). Chang arranges for the death of the paedophile son Billy (Tom Burke - THE HOURS), which prompts the emotionally manipulative matriarch Crystal (Kristin Scott-Thomas) to order her other son Julian (Ryan Gosling) to be avenged in turn.  This unleashes a wave of death with an unflinching logic - no-one who is guilty escapes, other than the man who, accepting his guilt, seeks an escape.

The style of this movie is similarly unflinching and unrelenting.  Nicholas Windig Refn retreats from the small semblance of emotional authenticity and narrative contained in DRIVE to the more arthouse purity of his Mads Mikkelsen Viking flick VALHALLA RISING.  There's a sense in which that character, as well as Driver, reach their apotheosis in Chang  - the man whose motivation is primal and almost robotic.  He has no emotion - barely breaks a sweat - we get that he has a daughter but could any of us say that he is attached to her?

In fact, the only real emotional relationship for us to get invested in, is that between Crystal and her son.  The typically elegant Kristin Scott Thomas is transformed into the Real Housewives of Psychoville, channelling Donatella Versace, Lady Macbeth, Livia from THE SOPRANOS.  Her performance elicits the few laughs of the movie, and could easily have slipped into spoof.  There's one moment when she's almost as nutso as MOMMY DEAREST, but somehow the film just manages to stay on the right side of serious.

As for Ryan Gosling, he's paring down the character of Driver into something even less dialogue-driven, and yet conveying a guilt, an honour, and a pent-up anger that is powerful and ultimately gives us the only catharsis of this movie. In a moment of levity, I thought he was like the Hulk, deliberately trying to constrain his anger. And then, at times I thought Julian was (rather improbably) like Alex Marchmain in BRIDESHEAD REVISITED, using a hooker to shield himself from his mother/wife.

Finally, to the real star of the show - cinematographer Larry Smith's breath-taking visuals - which combine the surreal, hyper-designed colour-schemes of a David Lynch nightmare and the slow deliberate tracking of Kubrick.  While the director has asserted that he was inspired by Gaspar Noe's ENTER THE VOID, look at those bar scenes and tell me you're not thinking of the Twin Peaks' Red Room. Watch Chang singing schmaltzy Thai karaoke songs in an eerie tableaux setting, sometimes with the sound overdubbed, and tell me you're not thinking of the Club Silencio scene in MULHOLLAND DRIVE where the old woman lip synchs to a cover of Roy Orbison's Crying.  The sound design from Cliff Martinez is similarly fantastic and at times I felt like I didn't need any dialogue at all - just this expressionist electronic take on religious organ music and the Lynchian visuals.

I guess I should address some of the objections to this film? Is it just torture porn? No.  The violence is largely off screen and is certainly at the service of Chang's deep ethics. The one full-on torture scene is difficult, but is in the context of a movie that is a massive Biblical metaphor, it serves a purpose in illustrating the "if the eye offends thee" vengeance imperative. To that end, it feels like some of the violence in Park Chan-Wook movies. And the final scene of grotesquerie is a masterpiece - echoing the seminal penetration scene in Georges Bataille's Ma Mere.

Is the movie condescending toward its oriental setting?  No. It's making a point about how Westerners can view Thailand as a place to escape and indulge their base desires, and how frustrating and infuriating this must be for the local population.  The key scene between Chang and Julian is absolutely crucial in this respect. In fact, the choice of using Thai language title cards for this movie with English subtitles is a very clear move not to pander to Westerners.

What can I say? I was transfixed by this film. I found it to be intelligent, deliberately styled, and, perhaps astonishingly, laugh-out-loud funny. It was absorbing even as I acknowledged that I didn't really care about the characters. It just wasn't that kind of movie.

This movie is available as a podcast below, or by subscribing to Bina007 Movie Reviews in iTunes.


ONLY GOD FORGIVES played Cannes 2013, and opened earlier this year in France, Belgium, Denmark, Italy, Norway, Sweden, Finland, the Netherlands, Poland and Turkey. It is currently on release in Australia, Germany, Canada, the USA, Israel, Portugal, Iceland, New Zealand, Ireland and the UK. It opens on August 8th in Hungary; on August 22nd in Singapore; on September 20th in Latvia and Mexico; on September 26th in Russia; on November 1st in Spain and in January 2014 in Japan.

ONLY GOD FORGIVES has a running time of 90 minutes and is rated R in the USA and 18 in the UK for strong bloody violence.
Posted by Bina007 at 21:27