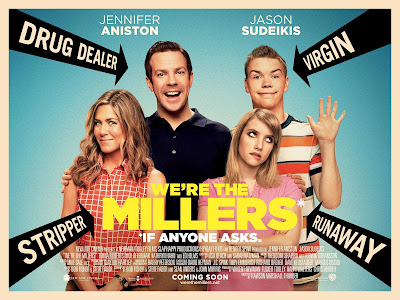 WE'RE THE MILLERS is a lukewarm, predictable comedy about a group of misfits who learn to love each other on a roadtrip to Mexico in which they're trafficking mary-jane.  (As a side-note I find it amazing that getting baked is now seen as so acceptable by the mainstream media that you can have a mainstream box office hit featuring you're friendly neighbourhood dope peddlar.)

The classic odd-couple comedy sees Jason Sudeikis of SNL fame cast as Dave, the arrested development pusher who is blackmailed into going to Mexico by his college room-mate turned megalomaniacal drug-kingpin (Ed Helms.) He figures he'll be better able to smuggle the drugs if he recruits a Brady Bunch style family, and turns to his neighbour, who happens to be a stripper-with-a-heart-of-gold, Rose (Jennifer Aniston), his goofy neighbour who is a virgin, Kenny, (yes - that's his tag!) (Will Poulter) and some homeless chick (Emma Roberts.)  Naturally, the misfits scrub up well, and bond over singing TLC's Waterfalls, and Rose gets to strip so that Brad Pitt can see how Jennifer Aniston still is, in perhaps the most unsexy stripping scene in movie history.  Finally, there's one of those Han Solo moments in which Dave realises that what he really wants is a family, and hey presto, it all ends happily.

There are one or two genuinely good laughs in this flick - the first aimed at satirising wannabe gangsta teen boys - and the second aimed at - what I can't even remember.  The rest of the film is disappointingly weak on humour, suggesting that the two screenwriters who wrote the piss-poor HOT TUB TIME MACHINE had more to do with this than the two screenwriters who wrote the brilliant WEDDING CRASHERS.  The direction, from Rawson Marshall Thurber (DODGEBALL) is fairly pedestrian, which is pretty much the description I'd give to this whole film. It's very Tab A into Slot B.  You know exactly where it's going as soon as you see the opening credits.   Acting-wise, Jason Sudeikis is always charming, as is Aniston, and Emma Roberts has little to do as the pissed off hobo.  It's good to see Will Poulter getting his first major US role, and he's good in a straight comedy role. But basically, this movie is one for DVD and dinner night at best.

WE'RE THE MILLERS has been rated R in the USA and 18 in the UK. It has a running time of 110 minutes.

WE'RE THE MILLERS is on release in the USA, Canada, Switzerland, Iceland, Austria, Denmark, Israel, Poland, Serbia, Bulgaria, Italy, Croatia, Greece, Hungary, Macedonia, the UK and Ireland. It opens next weekend in Belgium, Argentina, Germany, the Netherlands, Spain and Taiwan. It opens on September 6th in Russia, Singapore, Estonia, Finland, Lithuania, Mexico and Romania, and on September 12th in Chile and Italy. It opens on September 20th in France, Hong Kong, Norway and Sweden and on September 27th in Brazil.
Posted by Bina007 at 19:40