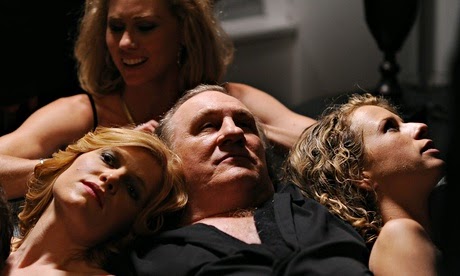 Exploitation director Abel Ferrara has finally found a cinematic subject perfectly attuned to his taste for excess and offensiveness.  The resulting work is at times hard to watch, but perfectly conveys the grotesque gluttony, corruption and arrogance that characterises the fall of Dominique Strauss-Kahn.  He was a towering public intellectual, head of the International Monetary Fund and a candidate in the French Presidential elections when he was accused of sexual assault my a hotel maid in New York, perp walked to prison and put under house arrest.  The charges were eventually dropped - the alleged victim's statement scene as problematic although that has since been contested. But the damage had already been done. DSK was politically untouchable and whether he was or wasn't guilty of that particular charge so many vile accusations came out - orgies, drugs, prostitutes, as well as a chauvinistic belief that the elite system would protect him - that his career was over. To this day, DSK is still facing charges ever more heinous, but has also sparked his own brand of conspiracy theory wherein defenders point out the politically convenient timing of the charges that led to his withdrawal from the presidential elections.

In WELCOME TO NEW YORK, Gerard Depardieu plays a thinly veiled version of DSK in a performance fuelled by vitriol and brave in its literal nakedness.  Depardieu has become a visual symbol of decadence - his massive bulk a hymn to gluttony - and in the first half hour of this two hour epic we are treated to an almost unbearable and unrelenting display of grotesquerie.  Women are groped, hookers exploited, food and alcohol and drugs gorged on.  The man we see resembles a literal pig, snorting and grunting and practically oinking over the flesh of the young women he can barely muster the energy to fuck.  What's even more disgusting is the fact that literally everyone around him is an enabler - the men, women, political appointees, security men - even his own daughter who puts up with his wildly inappropriate sexual banter with her fiancé.  As we're sucked into this world of excess it's not hard to believe that DSK would've believed himself untouchable.  And when we see him arrested, humiliated, taunted, stripped naked, it's almost hard not to feel sorry for him.

But the true power of this movie is revealed in its final hour when the protagonist's long suffering wife comes to New York to arrange a swanky apartment for his house arrest.  In the role of her lifetime, Jacqueline Bisset plays the role of the ambitious rich woman who saw her husband as a path to power, knowing full well his weaknesses, but is outraged and indignant at his lack of discipline. She shows exactly both sides of the DSK case - the system that enabled him and the public who are shocked at his actions. It's profound, moving and utterly brilliant.

I'm not saying that there isn't anything wrong with this film. Ferrara, as ever, pushes everything too far - the sex, the length of the film, the thematic heavy-handedness. But the point is that for once this excess is exactly appropriate for the subject matter. In some profound way, Ferrara has perfectly captured the essence of the DSK scandal.  And he should be applauded.

WELCOME TO NEW YORK has a running time of 125 minutes and is rated for strong sex and scenes of sexual assault. The movie played Cannes 2014 and is available to rent and own.
Posted by Bina007 at 19:37