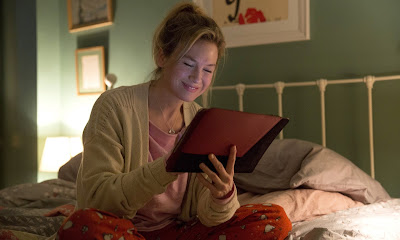 BRIDGET JONES'S BABY  is the latest instalment in the romantic-comedy franchise centred on the chubby klutzy Londoner (Renee Zellweger) trying to hook up with her real-life earnest Mr Darcy.  In this film, Bridget is 43 and has finally got her life in order - she has a great job, she's hit goal weight and she's quit smoking.  But after a one-night stand at a music festival with a billionaire dating app creator called Jack (Patrick Dempsey) and then with her former boyfriend Darcy (Colin Firth) she finds herself up the junction with no idea who the father is.  So follows a chamber comedy with both men turning up to sonograms and ante-natal classes, and the viewer waiting for the last act reveal of who the father is and who Bridg will end up marrying.

On the plus side, the movie is pretty harmless and contains enough laugh out loud moments to get you through the over-long two hour run-time.  Zellweger sells the physical comedy of being the relentlessly clumsy and awkward Bridget and Emma Thompson as her doctor provides the best laconic one-liners and disapproving looks.

But there are plenty of negatives too.  First off, there's a sub-plot about Bridget and her old-school journo chums being under threat from pretentious millennial hipsters who think old journalism is irrelevant. It's a strong story but goes nowhere. At no point is Bridget's job under threat from her being pregnant - at no point does she worry about what taking a year out of work will do to her career.  But of course she's not worried because - and this is the second point - this movie is deeply conservative and also, therefore, out of step with our times.  Because both of Bridget's potential partners are rich, well-educated, tall dark handsome men who will provide her with a house and financial support.  You can sense Emma Thompson's dissatisfaction with this as she inserts the only line regarding potentially raising the kid on her own - but that's all we get. There is no doubting the fact that we are going to end up at the altar, and that this is the appropriate aim for a single woman with a kid.

The third problem with the film is Renee Zellweger's face. This has been much written about and is a controversial point - would a man face such a raft of negative press over bad plastic surgery and fillers? Maybe not.  But I wouldn't be giving an honest review if I didn't say that her face is distracting - especially given the fact that the movie chooses to show Renee as a younger less-interfered with woman in flashback scenes.  I spent to much time in the slower middle of this film trying to figure out what she'd done to herself and why. Contrast this with Emma Thompson who is ageing elegantly and beautifully.

Despite my deep philosophical issues with this film, I did still have a good enough time watching it. But I'd suggest it as a dinner and DVD night film rather than something you have to rush to the cinema to see.

BRIDGET JONES'S BABY has a running time of 123 minutes and is rated R.  The movie is on global release.
Posted by Bina007 at 09:42