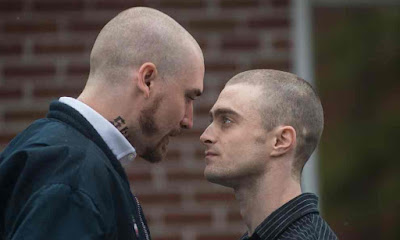 IMPERIUM is a film that chronicles the true story of a young idealistic FBI agent who went undercover in a white supremacist movement to try to uncover Unabomber type plots to terrorise America.  The agent is played by Daniel Radcliffe, his handler by Toni Colette, and the movie was written and directed by first-time feature director Daniel Ragussis. Unfortunately, the movie fails on almost every count.  The script is under-written and the direction creates no tension whatsoever.  Radcliffe is made to look over-geeky to the point of parody as the desk-bound agent, and is unconvincing as an Iraqi war veteran turned racist thug.  The alacrity with which he's accepted by the terrorists is just too easy and the ease with which he bats away their suspicions sucks the tension out of the movie. As the movie drips along toward its flaccid final set piece the only emotion I felt was thanks that it was all over. Ultimately, it's laudable that Radcliffe is willing to handle such politically incendiary material, but given the times in which we live, this feels like a missed opportunity to really mine the motives of people to turn to such a cause, and to explore what is really going on in these movements.

IMPERIUM has a running time of 109 minutes and is rated R.  The movie was released in the USA, France, the Philippines and Turkey earlier this year. It is currently on release in the UK in cinemas and on streaming services.  It opens in Singapore next week.
Posted by Bina007 at 09:54