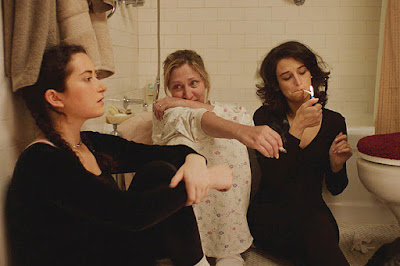 LANDLINE is a laugh out loud relationship comedy set in the mid-90s from direct Gillian Robespierre starring stand-up comedian Jenny Slate (THE LEGO BATMAN MOVIE).  It shows us a close knit family dealing with the fall out from two affairs, and focuses heavily on the female relationships and reactions with that.

The parents are played by Edie Falco (THE SOPRANOS) and John Turturro (THE NIGHT OF).  He's a failed novelist having an affair with a woman who provides the praise his wife fails to.  And while the movie gives his crisis some time, the main focus is on the complicated and moving reaction of his wife.  Of the children, the eldest is Dana (Slate) - a quirky and bubbly girl who has just become engaged to her long-time boyfriend Ben (Jay Duplass) but has an affair with her old flame Nate (Finn Wittrock).  I love that the writers of the film dare to give us in Dana what could be, and for some will be, a fairly dislikable character.  Dana can come across as spoiled and unthinking in her actions.  The writers are trying to make the point that women who have affairs are typically portrayed less sympathetically than men who do - and I get that - but it felt to me as thought the pendulum may have swung too far the other way. After all, if the mother gets a psychologically complex and fully explored reaction to her husband's affair, why can't Ben get more than a montage?  The family is rounded out by simultaneously the wisest and dumbest member of the family - little sister Ali (newcomer Abby Quinn).  She's a bright high school student who often seems the most emotionally mature of all concerned, but she's also making dumb choices in the name of rebellion. I found this section of the film the most fascinating and authentic, and Quinn to be the true star of the film.

LANDLINE is beautifully observed and has a light touch in recreating the 1990s.  It's constantly laugh-out loud funny and has some fantastic sight gags. I had a fantastic time watching despite my reservations of its treatment of the male characters. As I said, I get the need for balance in portrayal of female and male characters, but it just felt as though it had moved too far in the other direction for my liking.

LANDLINE has a running time of 93 minutes and is not yet rated. The movie played Sundance and San Francisco 2017 and opens in the USA on July 21st.
Posted by Bina007 at 08:07