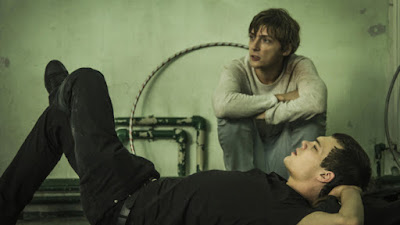 THE STUDENT is a tough, challenging, brilliant and depressing film about the battle between scientific knowledge and rising religious extremism that is colouring debate around the world.  Set in contemporary Russia it focuses on a teenage boy who suddenly adopts extreme religious views that manifest as homophobia, misogyny and creationism. This puts him in opposition with his high school science teachers and fellow students who wear revealing clothes and have sexual relations with each other. It also earns him a disciple in the form of teenage boy who is in love with him, provoking a strange and ambiguous response in the protagonist.  What's fascinating is seeing the response of those around him. His mother is exasperated but powerless. The high school kids take compromising videos of him but it doesn't seem to come to much. The science teacher is driven to near madness. But the liberal consensus is depicted as powerless to resist. The authority in the movie is the headmistress, often shown in an office beneath a picture of Vladimir Putin.  She sides with the pupil, noting that even in America, the government allows the teaching of creationism.

The resulting film is a damning indictment of religious extremism and the lack of backbone in liberal society to resist it. It's also a fascinating depiction of an aspect of contemporary Russian society, but poses difficult questions to western viewers about how far such currents are gaining ground in our own countries. I found it to be fascinating, disturbing, compelling, strange and yet too familiar by turns.  Not to be missed. I would also give special praise for the director who manages to take a stage play out of the theatre where so many of them stay and give it a real visual flair and dynamism.

THE STUDENT has a running time of 118 minutes and is not yet rated.   The movie played Cannes and London 2016 and opened last year in Estonia, Belarus, Russia, Italy, France and Greece. It opened earlier this year in Hungary, Norway, Germany, the Netherlands, and the UK. It opens in the USA on April 21st and in Poland on May 19th.
Posted by Bina007 at 22:24