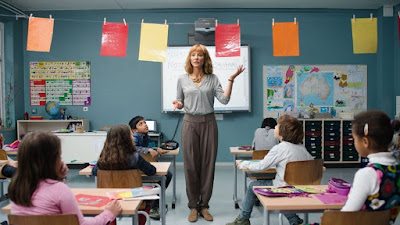 MANIFESTO started off as an art installation of simultaneously broadcast short films that have now been turned into a feature by director Julian Rosefeldt.  They all star Cate Blanchett as different philosophers, articulating their key beliefs in a variety of costumes and guises.  The film starts with her as a tramp rambling through a rotten concrete landscape before transitioning to Cate as an equities trader with a thick Long Island accent. But what we realise is that each segment isn't quoting a particular philosopher but  a miso-mash - apparently all pulling together to make a certain point. So in the homeless scene, we're meant to be talking about Situationism and it quotes Fontana, John Reed, Nieuwenhuys, Rodchenko and Debord. In the trader scene, which is meant to refer to Futurism, we get a mash up of Marinetti, Severine, Appollinaire and Vertov.

As we move from Cate as Punk (Creationism) to Cate as puppeteer (Surrealism) to Cate as Newsreader (Minimalism) I was struggling to understand what I was meant to get out of this film other than a deep respect for her talents at turning accents. The excerpts are sometimes iconic, sometimes resonate with contemporary politics, but a lot of the time are just superficial and abstract. This just isn't a film that coalesced to me, in any meaningful way, and I wonder if it had better have been experienced as art installation.

MANIFESTO has a running time of 95 minutes. The film has played as art gallery installations and in many festivals. It was released in UK cinemas last week and is rated 15 for strong language.
Posted by Bina007 at 20:54