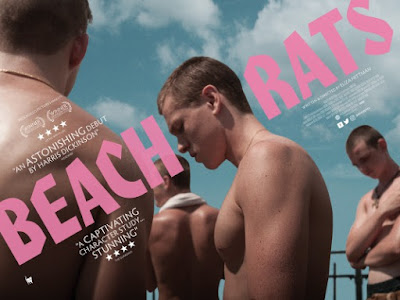 BEACH RATS is a beautifully observed brave film about a teenage boy struggling to come to terms with his homosexuality.  It's written and directed by award-winning sophomore director Eliza Hittman and benefits from delicately beautiful, 16mm, nostalgia-tinted photography from celebrated French cinematographer Helene Louvert (PINA!) The film stars British actor Harris Dickinson as a 19 year old high school graduate called Frankie, without job, car or aim in life.  His father is dying, his mum (Kate Hodge) is an exhausted caregiver, merely observing his comings and goings, and the only real emotional reaction we get from all that is Frankie looking bemused and distant and filching his dad's meds.  What he does have is a bunch of jock friends with whom he hangs out at the beach in Brooklyn, getting high, and up to no good. Against this typically "bro" hetero backdrop, boasting about conquests, Frankie attempts a tentative relationship with Simone (Madeline Weinstein), but she soon realises that he's not into her, and maybe gets the reason why. It's testament to the nuanced and subtle performances from both actors that we never truly know how far she gets it.  Simultaneously, Frankie is exploring the world of gay chatrooms, and moves from online flirting to midnight hook ups at the beach. I love the way that the director handles these without awkwardness or squeamishness, and never objectifies Frankie.  It's rare to see such an honest depiction of casual sex in any film, let alone showing homosexuality. Kudos to all involved but especially Harris Dickinson who gives a truly astounding break-out performance.

BEACH RATS played Sundance 2017 where won Best Director. It also played the BFI London Film Festival. It was released earlier this year in the USA. It was released in the UK and Ireland last Friday in cinemas and on streaming services. It will be released in Germany on January 25th 2018. The film has a running time of 96 minutes and is rated 15 for strong sex, nudity, drug misuse and language.
Posted by Bina007 at 19:39