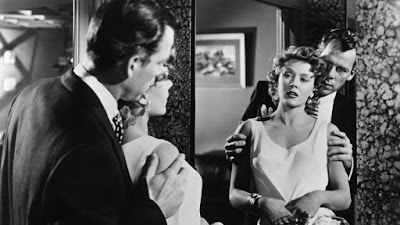 To complement the release of FILM STARS DON'T DIE IN LIVERPOOL - the true story of ageing Hollywood actress Gloria Grahame's affair with a younger British actor - the BFI is showing a number of her most famous films. This weekend sees the release of THE BIG HEAT and IN A LONELY PLACE. The former is a digital restoration of the 1953 noir thriller by Fritz Lang - the iconic director of METROPOLIS and M. It has long been a favourite of mine - a taut tale of corruption and the price of doing right - beautifully acted and shot. The film stars Glenn Ford as Sergeant Dave Bannion - a lone ethical cop in a dark world. Ford is perhaps best known to modern audiences as Clark Kent's dad in the original Christopher Reeves SUPERMAN film but before then he had long established himself as a charismatic if not conventionally good looking character actor, best known for the original 3:10 TO YUMA. Bannion is married to a loyal loving wife, Katie, played by Jocelyn Brando (MOMMIE DEAREST - and yes, the sister of Marlon Brando), and has a cute daughter. Every time we see his family home the score is upbeat and cutesy - a haven of good wholesome family values - all teddy bears and frilly curtains.

The film is set in progress when a cop is found dead, apparently having committed suicide.  Bannion is warned off investigating the case by his boss, despite the fact that the dead cop's mistress is convinced it was a mob murder to punish an informant with cold feet, and she too is tortured and murdered offscreen. Bannion keeps on investigating - confronting mob boss Lagana in his house - and tangling with Lagana's second in command, Stone (Lee Marvin). It's through standing up to Stone in a nightclub that he meet's Stone's girlfriend,  Debby, played by Gloria Grahame. Grahame's another fascinating movie star - pretty but conventionally beautiful - with a high pitched kind of goofy voice so brilliantly exploited in OKLAHOMA! as the "girl who can't say no". She becomes another victim of the violence against women that pervades this film, in an iconic off-screen moment involving a coffee pot. And yet the most chilling part of the film is how Bannion reacts to it, propelling the movie to its close.

Maybe it's just because I've been reading Mark Frost's Twin Peaks - The Final Dossier, but it struck me that there was a parallel between Bannion and Coop. The dark irony is that they try to do the right thing, but bring the woman who love them into danger, and often death.  Neither Bannion nor Coop have the self-awareness or humility to realise that they are the common thread that keeps putting women in danger - they are still driven to find out the truth no matter what the cost.  This leads us to the truly horrifying ending to TWIN PEAKS THE RETURN and the chillingly cold character that is Bannion, relentless, ruthless - maybe moreso than the mob in THE BIG HEAT.  The same inescapable darkness  pervades both works - and all the better for being embodied in men who superficially look good, almost goofily earnest.  Coop has his wide grin and apple-pie looks, wheres Ford has a kind of chubby-cheeked plain decency about his looks. In this, they perfectly sum up the philosophy of the works they star in - nice on the surface but slippery underneath. It's a great performance from Ford because he has to both play a "decent" cop, but also a man capable of great rage and violence. This is why the ending of THE BIG HEAT is so superb because it both satisfies - and doesn't - our need for justice.