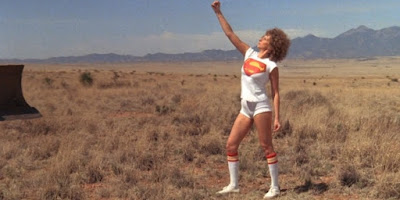 Where to begin with the third version of A STAR IS BORN, and by far my least favourite. This was produced in 1976 and starred Barbra Streisand in the Esther Blodgett - now Esther Hoffman role.  She's a Jewish soul singer with an afro, an of-its-time wardrobe and a thirst for success and stumbles into the life of Kris Kristofferson's John Norman Howard - an alcoholic stadium rock star and all around arsehole.  The movie is directed by screenwriter Frank Pierson, who never directed a feature again so burned was he by dealing with Streisand. Kristofferson also had nothing good to say. But I am cast back to a line in the film where Streisand's Esther says "I know you think I'm being difficult, but I just want to get it right."  Amen, sister.  And this really does signal one of the profound changes from the first two films. The Esther Blodgett's may have been ambitious but earnest and wide-eyed but Esther Hoffman is much more street-wise and tough.  Unlike her predecessors she refuses to change her name or image or sound to confirm to what the studios want, and takes her success on her own terms. In fact it doesn't feel like she compromises at all. She also gets her man, except that he's a raging alcoholic.  And when he dies - more of which later, she doesn't need much persuading to go back on stage.  She does so as if it's her birthright. Where her predecessors' tearily announced themselves to be Mrs Norman Maine, Ms Streisand is always only and always Ms Streisand.  The final concert shows her singing to him but utterly her own woman.

The character of John Norman Howard is the second major change from the first two movies where the protagonist was an actor called Norman Maine, a tragic jaded cynic who wanted the best for his wife.  Maine may have been a drunk but he was never infantile or wantonly destructive. Even the awards show incident was never silly or feckless - but rather came from a place of deep hurt and self-destruction.  Norman Maine is a noble figure and we sympathise with deeply, making his final act suicide a tragedy. He is in many ways the true dramatic centre of the film.   But in this version, John Norman Howard is an indulgent man-child who behaves recklessly putting other people's lives in danger from the first scene of the film. He's unlikeable and unrelatable and it seems entirely appropriate that he would cheat on his wife, and that his final sacrifice would be ambiguous. Does he commit suicide when he realises that Esther won't leave him, even after infidelity, or is his car accident just another alcoholic fuck-up? Who knows.  Who cares? And a version of A STAR IS BORN where I don't care about its tragic hero is thin indeed.

So the drama doesn't work, even though it does get a pleasingly feminist spin. And then we have all the songs, and costumes, which have REALLY dated - I mean beyond how the Judy Garland song and dance numbers have dated.  There's not a scene worth watching here, unless you're a fan of Streisand and Paul Williams hit Evergreen, which I am not.  Worse still, the style of the film comes across as a kind of pastiche of NASHVILLE. Gregory Dunne and Joan Didion's script often tries to do that Robert Altman thing of having characters talk over each other.  It felt fake and pretentious here.

There is literally nothing worth watching in this film.