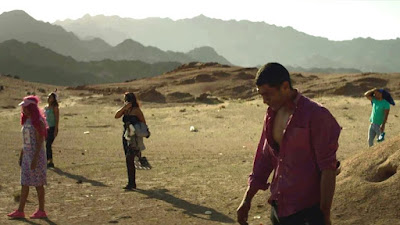 DREAMAWAY is a document that I really liked at first, but which outstayed its welcome.  What I loved was seeing behind and beyond a news story.  As a Brit, I was painfully aware of the terrorist attack on Sharm El Sheikh that led the UK government to ban direct flights to the resort. But other than knowing in some vague way that I can't safely travel to Egypt, I didn't give it another thought.  But this documentary focuses our attention on what happens to a tourist resort when one of its biggest markets is cut off. We are introduced to a cleaner, a DJ, a resort activity person, a guy who dresses up and poses with tourists - and see what their lives are when those tourists go away. And bear in mind that these are the lucky people - their hotel hasn't been shut down, as many other hotels, cafes and restaurants and bars have been.  They may be on half wages but they still have jobs.

The result is a melancholy and surreal film in which we see employees move into deserted hotel rooms - a cleaner with such a small amount of rooms to clean that she lies down in one and watches TV - a group of resort entertainers doing a aqua gym routine with no-one in the pool to join in - a DJ playing music to a deserted dancefloor. It's a very tangible picture of economic depression that reminded me a bit of footage of ghost towns in Florida and China after the financial crisis. Pristine new buildings with no-one to enjoy them is a very sad and pitiful thing. And the lives are sad and pitiable to - whether financially or emotionally - as the young girls complain about the lack of other girls to hang out with because the sacked workers have all gone home.

Where I found the documentary lost me was in the more fanciful moments where the main characters speak to camera and then follow up a - I kid you not - inflatable giant black monkey on the back of a moving truck that seems to dole out life advice. I could've done without this and perhaps have done with more context or contrast.  I read somewhere that the film-makers had originally planned to do a compare and contrast between Sharm and Cairo and I would have preferred that.

DREAMAWAY has a running time of 86 minutes. There are still tickets available for one of two screenings at this year's BFI London Film Festival, where it is screening in the Documentary competition. The film does not yet have a commercial release date.
Posted by Bina007 at 06:30