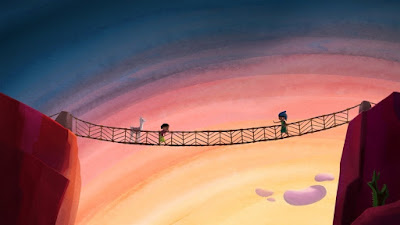 PACHAMAMA is an absolutely adorable children's animated movie from the people that brought you the lovely ERNEST AND CELESTINE. It's set in 16th-Century Peru where three cultures are in conflict. First of all we have the villagers who worship Pachamama, the Earth Mother, who gives them a good harvest. Then there are the Incas who demand tribute with seemingly little to offer in return - demanding rather than being symbiotic with nature.  And finally, new on the scene are the Spanish imperialists who are letting the Incas think they are in charge, for now. Amidst this dual attack on his village's peaceful life, our hero Tepulpai decides to prove his worth by rescuing his village's golden orb from the Incas, and the Spanish knight who sees it for the first time. He's helped by his friend Naira and her pet llama.

I actually learned a lot about this period of Peruvian history from the film, and made a promise to myself to discover more. I was intrigued by the idea of this native Andean culture being hollistic and harmonic, with the animation often drawing back to show us a lush landscape and really giving us depth and height.  The colour palette is warm and welcoming.  And then this village becomes threatened both from within and without. The Incans are drawn somehow more boxily rather than in round organic shapes, hiding with their wealth inside their temples - and this becomes even more extreme with the sharp angles of the Spanish metal helmets and horses, seeking to possess the orb without really understanding it.

And of course, set against this, there's just a lovely story of a kind of arrogant whiny boy who discovers his own abilities and a newfound respect for his own culture through the film. It's an absolute joy to behold.

PACHAMAMA has a running time of 72 minutes. Sadly there aren't tickets left for the only screening during the BFI London Film Festival 2018 but watch out for future commercial release dates.
Posted by Bina007 at 16:45