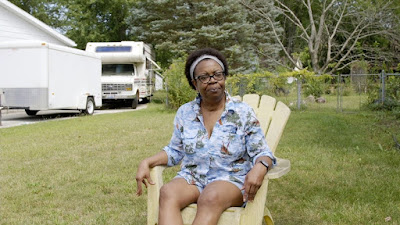 YOURS IN SISTERHOOD is a powerful and deeply affecting documentary to be watching the day after the Kavanaugh hearings and in the midst of the #timesup and #metoo movements.  In fact, before watching those hearings yesterday I watched an old episode of BOJACK HORSEMAN where the California Senate bans guns rather than have woman own them.  Diane says "I wouldn't have thought that politicians would hate women more than they love guns" or something to that extent.

The tragedy of this situation is how little progress we seem to have made.  And this is perfectly encapsulated in this documentary which couples contemporary women with the words of those in the 1970s, who wrote letters to the feminist magazine Ms.

Director Irene Lusztig takes a series of women of all races, ages and political views, and frames them squarely in the centre of their ordinary lives.  She pairs them with a letter that speaks to them - a modern cop reads a letter from a woman frustrated she can't get hired as a cop in the 70s - a modern student who is feminist AND pro-life, reads a letter from a woman who was the same in the 70s. The women read the letters and then comment on what it makes them feel or think.

What I love about this film is the multiplicity and diversity it shows of womanhood and feminism.  We see women struggling with workplace discrimination, misogyny in the home or school, living difficult lives. But their reactions cover sadness, anger, political provocation, perplexed confusion.  And their resolve covers different political stances. There's a richness and beauty in this that's rarely seen on screen where there's often a sense that there's a kind of "right" way to be a feminist and a set of views and positions that this must encompass.  And there's a healthy debate about whether Ms was - and the feminist debate still is - representative of the black experience, for example. The resulting film is provocative, uplifting, at the same time melancholy, and gripping. I would thoroughly recommend it.

YOURS IN SISTERHOOD has a running time of 101 minutes. It played Berlin, HotDocs, Melbourne and will play the BFI London Film Festival 2018.  There are still tickets available for both screenings.
Posted by Bina007 at 06:00