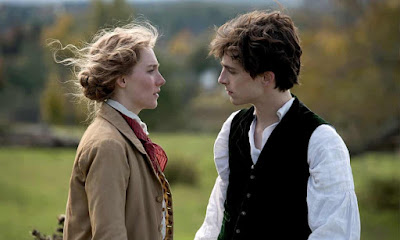 Greta Gerwig has created perhaps the most beautiful, vital and affecting version of LITTLE WOMEN yet seen on screen. Even better, she has opened improved upon the original novel and more slavish adaptations by making Amy March a character of some wisdom and agency by the end, and by making Laurie's choices more credible. There is nothing I would fault in this film - nothing I would add or subtract. I was low-level crying for much of the final hour, and not just at *that* plot point.  I felt I had been through the wringer and really loved the March women and respected and understood their choices.

For those unfamiliar with Louisa May Alcott's classic novel - revered in the US but far less well known in Europe, the book is set during the American Civil War. An earnest Christian father is away at the front, leaving his wife Marmie to raise their four daughters - the little women of the title.  The eldest - Meg - is sweet and kind and aspires to be a homemaker like her mother.  The second eldest - Jo - is an aspiring writer, tomboy, and to many the true protagonist of the novel.  The next is Amy - beautiful and superficial in the novel, and given a revelatory expansion of feeling and story in this version.  And the youngest is piano-playing sweet Beth.

Eliza Scanlan (SHARP OBJECTS), Emma Watson (BEAUTY AND THE BEAST) and Laura Dern (MARRIAGE STORY) are all just right as Beth, Meg and Marmie respectively.  But they aren't the focus of the novel or this film. Jo is played with characteristic energy and earnestness by Saiorse Ronan, but I actually preferred Maya Hawke in the recent TV miniseries.  The real star of the show is Florence Pugh (MIDSOMMAR) as Amy, brilliantly playing both a petulant silly child and the more cynical, weary but fundamentally good older woman.  And a lot of the credit for this has to go to writer-director Greta Gerwig (LADY BIRD) - who has given the women a more pragmatic take on the economic position of women in the late nineteenth century without making their feelings seem anachronistic or overly "woke".  I also absolutely love the way Gerwig splits the story in two and has the adult Jo remember scenes of childhood in a way that enhances the emotional punch of the final choices of the girls.

In the other roles, I particularly liked Tracy Letts (LADY BIRD) in a cameo as Jo's publisher Mr Dashwood and Louis Garrel as the blunt, honest Frederick.  I thought James Norton's dull Mr Brook was a bit forgettable. Finally, I really loved Timothee Chalamet (CALL ME BY YOUR NAME) as Laurie. His love declaration to Jo is utterly heartbreaking and their entire relationship fizzes with authentic sibling physical intimacy.  But it's his final realisation of love that's truly touching. It was also rather good to see him play a final meeting with a rival for laughs - a side of this rather intense young actor that we rarely see.