BY THE GRACE OF GOD / GRACE A DIEU 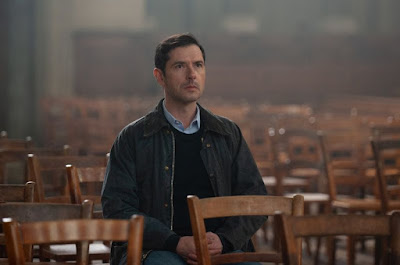 Francois Ozon's BY THE GRACE OF GOD is a film that stands apart from the rest of his oeuvre.  Showing he can match his style to the subject, he has made a sober, reflective, beautifully paced and acted film about the most serious of topics - that of child sex abuse in the Catholic Church, and to compound that crime, its institutional cover up for decades.  By now we are sickeningly familiar with the story of paedophile priests being found out, and simply moved on to another parish to commit their crimes on another unwitting flock.  We are familiar with the heartbreak testimony of survivors and the seemingly interminable process of bringing these men to real criminal (as opposed to ecclesiastical) justice. But this film remains compelling because it's such a delicately, beautifully mined character study of how a group of men cope differently with their abuse.  And despite the darkness of the material it's ultimately a quiet film that builds to something rather hopeful and wonderful  - as these men form a kind of familial supportive bond. That might or might not be enough for all of them to pull through their trauma, but it's in this carefully mined character study that the film is at its most compelling.

BY THE GRACE OF GOD has a running time of 137 minutes.  The film played Berlin 2019 where it won the Silver Bear. It also played the BFI London Film Festival. It is now on release in the USA and in UK cinemas and on the Curzon Home Cinema streaming service.
Posted by Bina007 at 09:58