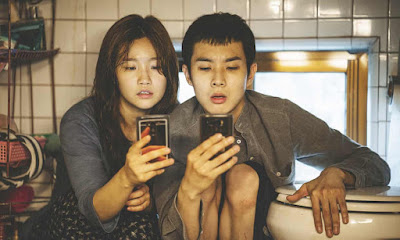 PARASITE is a rightly critically acclaimed black comedy/political satire from Korean director Bong Joon Ho. It's a film that speaks to the profound income inequality that we see around the world, and the social anxieties that the super-rich invent to give them something to do.  The rich family in question here lives in a beautifully modernist house - mother, father, spoiled son, elder daughter.  They are placed in contrast with a poor family living in one of Seoul's "sub-basements" - dank, fetid, insect-infested, sub-standard housing for the city's poorest residents - prone to flood during the rainy season. Improbably, the son in the poor family gets an in to the rich family, pretending to be a university student to tutor the daughter. He then contrives to have their driver and housekeeper sacked and to get his own mother and father to replace them. He also gets his sister into the house as a tutor for the small kid.  Of course they have to pretend not to know each other. The movie reaches its climax when the rich family go away on holiday, and the old housekeeper comes back, vowing revenge, and with her own dark secret to protect.  The result is skewering, violent, social revenge. Because as feckless and laughably superficial the rich family is, they still have their prejudices - expressed here as the fear of the fetid stink of the sub-basement dwellers.  They can lock the poor out of their gated house, but that smell comes over the walls.....

This film is beautifully constructed, acted and built.  The modernist house and sub-basement are meticulously created.  The script is at turns hilarious, tragic and absurd.  The performances both move one to tears and laughter. The film isn't without its longeurs in the middle section, and I would've ended it ten minutes before it ends, but this is nothing in a film of such originality and audacity.  There's a particular scene, where the poor family sneak out of the rich house on the hill, through pouring rain and flooded streets, down and down through the city's streets and staircases, to the hellish world of the flooded sub-basement. It's poetic and tragic.

As with THE KINGMAKER this is a film that speaks to us in the West. The income inequality and class prejudice resonate.  You could easily remake this film set in the OC, or in Notting Hill.  And I'm sure somebody will.

PARASITE has a running time of 132 minutes and is rated R.  The film played Cannes 2019 where it won the Palme D'Or by unanimous verdict. It also played Telluride and Toronto. It opened in the USA in October and opens in the UK on February 20th 2020.
Posted by Bina007 at 11:41