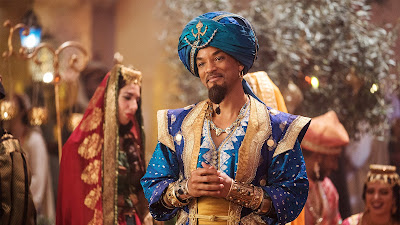 I approached the live-action remake of ALADDIN with extreme cynicism. I didn't understand why you'd want to remake the perfection that was Robin Williams in the original animated version, and I had my doubts that mockney action director Guy Ritchie was the guy to do it.  But I have to admit that this film won me over within its first minutes and that by the end the I was a committed fan. It is, in essence, a very faithful adaptation with all the beloved songs from Alan Mencken; all the beloved characters; and even some of the set piece action and dance numbers recreated scene for scene.  But it does so much more in its delineation of character and acknowledgement of current political mores, and yet none of that feels clunky.

But let's start with what this film lives or dies on - the performance of Will Smith as the Genie.  I have to say that he is just wonderful - charismatic, effervescent, truly a warm and loveable figure.  Crucially, Smith makes the figure his own, rather than trying to ape the untouchable Williams, and I love that he gets his own love-story framing device. His genie is almost more human, more warm and more touching that Williams', and the film benefits from that.  Smith's Genie also doesn't dominate the film in the way that Williams' did and that's all to the benefit of the really impressive cast of actors playing the other roles.  I really liked Mena Massoud as Aladdin - he was charming, smart and I really rooted for him. But I felt he was outshone by Marwan Kenzari (MURDER ON THE ORIENT EXPRESS) as a superb Jafar - almost like an Edmund from Lear with a kind of demented logic to his scheming - a poor boy like Aladdin who resents that he doesn't live in a pure meritocracy where his smarts would be properly rewarded.  But most of all, I loved Naomi Scott (POWER RANGERS) as Jasmine.  She has strength and agency and her costumes, while stunning, aren't the cliched skimpy numbers from the original film. Mencken gives her a new song that shows her desire to be a just ruler and decide her own fate, and in this film Jasmine is not a damsel in distress but truly the protagonist to Jafar's antagonist.  I really rooted for Jasmine and Aladdin to get together, but even more I rooted for Jasmine to rule, and that's as it should be.

All of this lovely character work is situated inside a truly stunning production design that Guy Ritchie's kinetic camera-work shows off to its maximum. It turns out he really was the guy to direct this film and I really can't fault any of it.

ALADDIN has a running time of 128 minutes and is rated PG-13. It was released earlier this year and is now available to rent and own.
Posted by Bina007 at 10:14