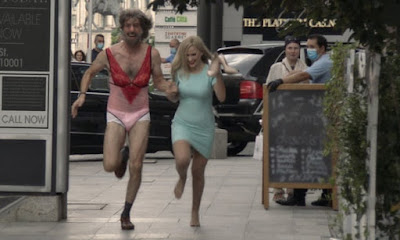 In a world where large swathes of educated people wilfully believe that vaccinations cause autism; and that the Clintons and Bidens are part of an elite paedo ring; and that Covid is a hoax; I am was was really wary of watching a new BORAT film.  Isn't real life already filled with toxic racism, homophobia and misogyny?  How do you satirise bigotry when the entire political discourse of America in 2020 feels like it's gone through the Looking Glass?  But I am so happy that I watched this film, because it's really fucking funny, and really fucking horrifying, and both are important things to experience and acknowledge right now. Because whether or not the White Supremacist in the White House is evicted next January, the attitudes he exposed, the grievances and bigotry he unleashed, the lies he peddled will remain in the public discourse.  We need Borat to help us channel our anger into laughter, but we need to feel angry nonetheless.
Of course, if the world has changed for us, it's also changed for Sacha Baron Cohen. Borat is so recognisable he has a knock off fancy dress costume as seen in this sequel.  So Cohen couldn't actually use the Borat character to lure his bigoted marks into a false sense of security and expose their hatred.  Rather, he has to spend most of the film as Borat dressing up as someone else. And the real heavy lifting is done by the previously unknown but apparently comic genius Maria Bakalova, playing Borat's daughter Tutar. It is Bakalova that exposes the misogyny and sexual perversion at the heart of public life, not least in the coup de theatre that is the final scene where she plays a OAN-style news reporter in mini-dress and blonde wig, buttering up a lascivious Rudy Giuliani, who is all too ready to have a drink with her in a bedroom, let her take off his mike, lie back on the bed and apparently start to masturbate. What an absolute sleazebag.
Which isn't to say that Baron Cohen/Borat doesn't have some phenomenal scenes himself.  In this sequel, we see Boart released from a long prison stint for embarrassing Kazakhstan's dictator, and sent to America to offer Trump a gift to make sure that he's seen as a friend of Trump in the same way that Bolsanaro and Putin are.  But Borat's daughter Tutar has contrived to be shipped to America instead, so that Borat has to offer HER as a gift. Cue some really queasy discourse about the pornification of young girls, and the appropriate role of women in modern life.  The most awful scenes are probably a tie between an anti-abortion pastor ignoring a case of incest and rape to focus on preventing abortion, and Borat in disguise singing a song to the delight of his bigoted audience as they chant along that their enemies should be given the Wuhan Flu while raising Nazi salutes.
Basically this is a film that makes you sick, but also makes you laugh in the way that maybe only Sacha Baron Cohen can. It's absolutely the film for this moment.
BORAT SUBSEQUENT MOVIEFILM has a running time of 95 minutes and is rated R. It is streaming on Amazon Prime Video.
Posted by Bina007 at 16:12