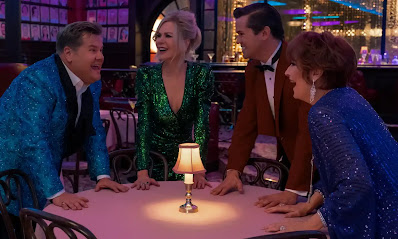 THE PROM is a ridiculous frothy neon-lit confection that perfectly fills our need for joy in this winter Covid lockdown. I know it's taken heat for a) not casting its original Broadway cast but upping the ante with big Hollywood stars and b) not casting an actual gay man but James Corden playing a very cliched camp gay man but I honestly do not care because the result is just wonderful! Meryl Streep and Corden are superb as an old down-on-their-luck, woefully un-self-aware couple of Broadway stars! Corden is just very good in this role! Despite their narcissism and delusion we root for them and their two friends - a similarly hapless chorus girl played by Nicole Kidman and a barman played by Andrew Rannells.

This wonderfully kooky foursome cynically jump on a social media story about a teenage lesbian who isn't allowed to go to her homophobic small-town high school prom.  They swoop into town and lobby in her favour, but when the rest of the town cold shoulders her by not turning up, they throw her an inclusive prom of her very own. The dramatic tension comes from whether her girlfriend will come out, despite the fact that her mum (Kerry Washington) is homophobic; and whether James Corden's characters mum (Tracey Ullman) will finally accept him. But suffice to say that this all ends in a wonderful show-stopping tune with enough glitter and neon-light to banish the Covid blues.

This film is cheesy, predictable, progressive wishful thinking but damned if I didn't shed a happy tear by the end. Like SCHITT'S CREEK, this film shows us the world as it could be, and how joyous a thing it is to behold.

THE PROM is rated PG-13 and has a running time of 130 minutes. It was released on Netflix on December 11th.