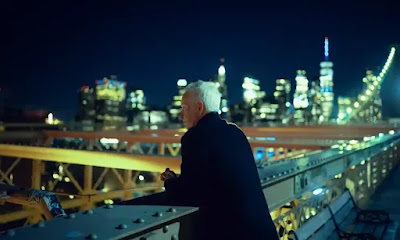 MCENROE is tennis legend John McEnroe's raw, honest and ultimately uplifting account of his own life and career, as directed by sports documentarian Barney Douglas.

Douglas made his name with a couple of cricket documentaries and applies his deeply empathetic and well organised interrogation of the psychological pressures of elite sport shown in THE EDGE to the world of tennis. The result is a captivating mix of archive footage and contemporary interviews with McEnroe and his kids that reveals a troubled perfectionist, fully aware of his mistakes and yet still open to love. That hopefulness and honesty takes this way beyond a typical sports documentary and into the realms of basic life advice from a guy who's seen a lot and lived to tell the tale.

The movie opens with a puppy fat teenage McEnroe full of ambition and driven by a father who comes across as a bit of a nightmare.  He blazes into the elite world of tennis but is cold-shouldered by Connors - something that only drives him further.  Surprisingly - charmingly - despite his on-court antics he forms deep personal friendships with his heroes of tennis cool, Vitas Garuleitas and the near-silent Bjorn Borg. The best testament to that friendship is that the publicity-shy Borg agrees to be interviewed in this film.

McEnroe doesn't hide the conflict of those years: and what it was like to dominate tennis but to do so at the expense of a friend who then took early retirement because he couldn't cope with the defeat. It's still regretful that we missed potentially years of on-court rivalry, and one senses that McEnroe never quite recovered from not having Borg as a foil.

Meanwhile, in his personal life, McEnroe married Tatum O'Neil, hoping that their shared celebrity would lead to empathy.  But few marriages survive addiction and infidelity and both Mack and his kids speak honestly about the self-destructive behaviour on both sides.

The great news for Mack is that while his tennis never really recovered, a second marriage to rock musician Patti Smyth gave him a second chance at being a husband and father, and it genuinely feels like he's in a good space with his kids now, and insofar as he's a man at peace with himself, he is that. For someone to come through tortuous elite sport, addiction, and a brutalising divorce and get to this place of honesty and acceptance, is really hopeful and makes for an inspiring film.

MCENROE has a running time of 104 minutes.The film played Tribeca 2022 and is currently available to rent and own.