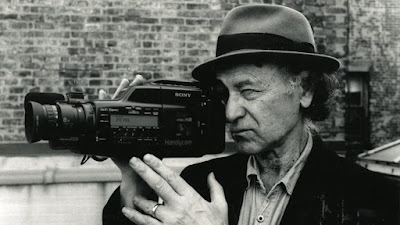 K D Davison's documentary of film-critic and avant-garde director Jonas Mekas is deferential to the point of banality.  This is frustrating given the level of access she had, and the sheer volume of self-diarised film footage.
The man is, however, fascinating. Mekas was an immigrant from a World War Two Nazi labour camp in Lithuania, and came to New York with his brother. He set himself up as a film critic for Village Voice, archivist and distributor, influencing and encouraging generations of American auteurs and artist from Ginsberg to Jarmusch to Scorsese. But behind the gregarious one-man social movement was the trauma of loss, migration and never quite knowing oneself, captured most movingly in the film where he returned home to Lithuania 25 years after leaving it, and in footage of Mekas in old age disturbed as to who he is.
I wasn't familiar with Mekas' work before I watched the film and I can't say I'm tempted to go back and revisit it. I was far more fascinating by Mekas as a complex man with a conflicted past as emblematic of the late twentieth century European experience. It's true that Davison doesn't shy away from the controversies but I wish she'd interrogated them more: the teenage pro Nazi sympathies under the guise of being anti-Soviet - retreating to German territory at the end of the war - the homophobic tone of his early criticism.
The result is a documentary that washed over me rather than truly engaging me - something workmanlike rather than compelling.
FRAGMENTS OF PARADISE has a running time of 98 minutes. It played Venice and Telluride 2022 and will play next month's BFI London Film Festival and tickets are available here.
Posted by Bina007 at 17:18