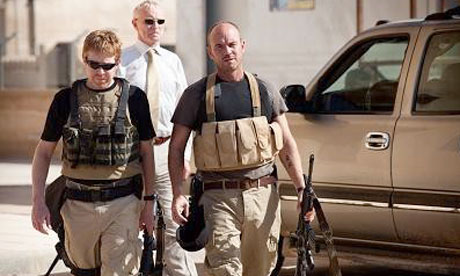 Ken Loach is one of Britain's most uncompromising directors. His films are political, unblinking, and have a relentless focus on the reality of working class life. Even his most recent film, a comic fantasy called LOOKING FOR ERIC, was firmly rooted in the everyday petty humiliations and victories of life as a postman in a Northern town. It was, then, only a matter of time before Ken Loach gave us his take on the war in Iraq. And with his typical perception for what is at the core of an issue, he goes straight for the one truly unique facet of this war - the widespread use of mercenaries. This outsourcing of state-power - this compromise of the idea that in liberal democracies the elected government is the only legitimate source of violence - because it is only the government that can be held to account for its abuse - is absolutely key to understanding Iraq. It is the abuse of this power, widely reported in the more thoughtful media, that serves as a kind of short-hand for all the abuses of power that have come to characterise the war in Iraq. Power abused, violence unchecked, and all for no end other than the perpetuation of power and the amassing of wealth.
Unfortunately, the insights that Loach and his regular screen-writing partner, Paul Laverty, bring to the Iraqi war have not resulted in a compelling film. In fact, I found ROUTE IRISH to be near unwatch-able - it fails as a thriller; it contains a truly risible love story; and suffers woefully from the heavy-hand of didactism.
The story begins with the death of a mercenary called Frankie on Route Irish - the road from Baghdad airport to the Green Zone. His best friend Fergus, also a squaddie turned gun for hire, decides to investigate the death, convinced that the company they worked for is covering up foul-play. Fergus investigates with the help of Frankie's widow, Rachel, and the translating skills of a local Iraqi refugee. Sure enough, the video on the phone is compromising.
Let's break down why the film fails. First, it fails as a thriller. We all know the mercenaries will have committed some heinous crime against innocent Iraqi civilians and Frankie too - after all, we've all seen wikileaks and it's not like Ken Loach is going to side with the neo-cons, is it? Second, it fails the test of simple logic. Once Fergus finds the damning video, why doesn't he put it on the web? This is what his Iraqi helper tells him to do. It's what Rachel tells him to do. Fergus refuses. He says he wants to get more, better evidence. But we know what's really going on. Loach and Laverty want to extend the film - draw out the narrative - so that they can show Fergus' moral disintegration - show him resorting to torturing a witness. Or whatever. Simply put: in the age of Wikileaks, I can't take any movie seriously that doesn't just dump the evidence on the web as soon as possible.
This brings us to the central failing of this film: the lack of emotional grip at its heart. After all, in a world of wikileaks - years after Brian de Palma's REDACTED - what can a movie like this really teach us? Nothing about the facts. Anyone who wants to know can find out. So the reason to watch a movie like this can only be because empathy with well-written characters can teach us something about ourselves and give us an emotional insight that mere documentary evidence cannot give. But ROUTE IRISH fails on that score too. It's characters are too crudely, thinly drawn to be of interest. I didn't buy into Fergus. I didn't buy into his slow decline into torture. And I certainly didn't buy into his clichéd relationship with Rachel. Mark Womack (Fergus) portrays anger, frustration and guilt by shouting loudly. Andrea Lowe is wooden and two-dimensional as Rachel. The casting of British stand-up comedian John Bishop as Frankie is a distraction.  Too little space is given to the Iraqi refugees. Most damning, one of those characters actually asks Fergus why he is obsessed with the death of one Brit when so many Iraqis are dying. Isn't it just another act of chauvinism to have another film from a Western point of view? Loach never answers this point.
ROUTE IRISH is, then, a complete failure. A failure in execution at every level. I was sadly disappointed.
ROUTE IRISH played Cannes 2010 and was released in Norway in September. It will be released in France on March 16th 2011.
Posted by Bina007 at 23:50