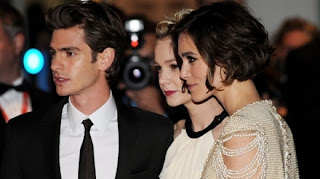 NEVER LET ME GO is a patiently paced, melancholy sci-fi movie that looks like a Merchant Ivory film - BLADE-RUNNER meets THE RAILWAY CHILDREN.  As it opens, Kathy, Tommy and Ruth are children at a picturesque English boarding school called Hailsham. They are good little children - they accept what their teachers tell them about the dangers of the outside world and the importance of keeping well. They are, and I'm sure everyone knows by now, bred as organ-donors. Indeed, the strength of the film is that this fact is taken as read. Far more interesting to avoid petty suspense and to spend precious cinema time examining the ramifications of that fact.  The children know they are donors but also know that they are human - they feel, love, make art - in short have souls - an idea that is deeply disturbing, indeed repugnant, to the society that has bred them.
The sci-fi/pol theory content of the book and film is softened by its immersion in an emotional drama. Kathy (Carey Mulligan) and Tommy (Andrew Garfield) fall in love as teenagers, making Ruth (Keira Knightley) resentful and ultimately destructive.  What could be more human than love and jealousy?  And what is more powerful than confronting people with the consequences of their actions?
But, as with many a London Film Fest Opening and Closing Night Gala, this movie is technically well-made (director - Mark Romanek, ONE HOUR PHOTO) and by no means unwatchable, but it's lacks any real spark.  The pace is too lugubrious for me - the emotions too restrained. Carey Mulligan and Andrew Garfield are superb as Kathy and Tommy but Keira Knightley is utterly flat as Ruth.  I'm not sure how far this is down to Alex Garland's adaptation of Kazuo Ishiguro's novel - in the novel Ruth has more passion to her, more spark - or whether it's just that Knightley is quite simply outdone by Mulligan.  At any rate, by the time the whole thing limped into a final scene with a clumsy voice-over I was rather bored by it.
NEVER LET ME GO played Telluride and Toronto 2010 and was released in the US last month. It open sin Singapore and the UK on January 20th 2011, and in Belgium, France and Germany in February.
Posted by Bina007 at 23:43