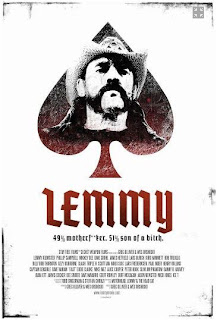 LEMMY is an infuriating documentary. The directors have an all access pass to Lemmy Klimister - legendary Motorhead front-man/bassist; obsessive fruit-machine player; drinker; womaniser; and general all-round bad-ass - and they squander it by producing an unfocused, over-long, indulgent documentary. You can tell this is a bad film because you leave the theatre wanting to know more about Lemmy - about his childhood, his style of playing, how influential he was on other musicians, how far he regrets not knowing his adopted son - and you KNOW that the documentarians could've asked Lemmy about all this stuff - but they didn't. Nope - they were too busy hanging out, filming concert footage and being so co-opted by the icon that they didn't dare make him really delve into his past or his rather disturbing fetish for Nazi memorabilia.
I came out of this flick with as much respect for Lemmy as I went into it with - which is a lot - but no real extra knowledge. We all know how he started off in the Rockin Vickers with a pudding bowl haircut - how he roadied and dealt for Hendrix - how he played space-rock with Hawkwind - got kicked out for being busted by narcs - and then founded Motorhead, wrote Ace of Spades and became a rock legend. And even if we didn't think he was a rock legend, the film-makers give us a parade of contemporary greats - from Dave Grohl to Slash, to tell us that he is. What they don't do, with the exception of Slash, is really talk about his singing style or his playing style, and the mechanics of why he's so good. In other words, no one really gets under the skin of the music.
The result is a documentary that advertises itself as getting behind the iconography and controversy to the truth of Lemmy, but that in reality just glories in that iconography. In other words, this isn't a documentary at all, but hagiography. And superficial hagiography, at that. No one really cares, technically, why Lemmy is great. They're more interested in the legend.
LEMMY played a bunch of festivals and will be released in the UK on December 7th.
Posted by Bina007 at 23:50