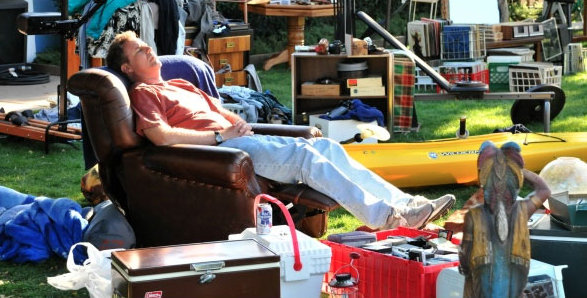 You lose your job. You come home. Your wife has locked you out of your house, left your belongings on the front lawn and asked for a divorce. What do you do? If you're Nick Halsey, you drink beer, you order take-out, you shower with a hose and start a yard sale, largely to pass the time. You strike up a friendship with the nice pregnant lady across the street, you ask your neighbours to throw you some electricity, and you play ball with a young bored kid. Maybe you even start to think about your life - about the alcoholism that has landed you in this situation - and try to reconnect with an old high school friend. But there are no easy answers.
It's a great movie set-up, and Dan Rush's debut feature, based on a short story by Raymond Carver, is a quiet, sympathetic little movie. Will Ferrell, in the lead role, gives a muted, restrained performance that is convincing and charming. He is ably supported by Rebecca Hall, Laura Dern and, in particular C J Wallace as the little kid. I like that Rush/Carver give the alcoholic no easy wins - this isn't that kind of film. But, still, this movie has a sort of Hollywood sheen to it - a warm glow - that was entirely subverted in another low-key film - CYRUS. During the movie, I really did care about what happened to the lead character. But once the lights came up, it was utterly forgettable. There wasn't enough bite to it - or enough content to sustain the run-time. Apparently this movie started off as a short-film, and I couldn't help but wonder if that was the best format for this novella turned movie.
EVERYTHING MUST GO played Toronto and London 2010. It doesn't yet have a commercial release date.
Posted by Bina007 at 23:14