HOWL is a beautifully made film about Allen Ginsberg's iconic Beat poem, published in 1955. Honest, raw, sexually explicit, Ginsberg described the reality of life on the road in the counter-culture - how young urban hipsters were really living and feeling. That rawness and authenticity - the proud joy at enjoying sex, drugs, literature, music and good company - and the anger at the establishment, the bourgeoisie, still translates. I guess a lot of us can remember a time in our teenage life when we first read Howl, and then maybe Kerouac's On The Road or Burrough's Naked Lunch.
Acclaimed documentarians, Rob Epstein and Jeffrey Friedman (THE TIMES OF HARVEY MILK) have produced a film that has the authenticity and immediacy of a documentary, recreating iconic photographs of Ginsberg; using a script that is almost entirely based on interviews and transcripts of the court-case wherein publisher Lawrence Ferlinghetti was charged with obscenity for having published the poem. This is, however, no court thriller - especially as we know the outcome! Rather, Epstein and Friendman use the court-case as a door through which to explore contemporary reactions to the poem - from prudish shock and patronising contempt through to bewildered admiration and excitement. And that's the genius of HOWL. It's a movie that dares to give us what is, essentially, literary criticism rather than a prurient examination of The Beats' sex lives or a conventional biopic. In other words, the film-makers want us to understand why Howl was important, artistically and socially. And in doing so - in showing us Ginsberg talking about how he wrote, and why he wrote, we get as much of a picture of the man as any straight-ahead biopic would've given us.
Stylistically, one has to give Epstein and Friedman credit for the sterling recreation of the 1950s - from cramped apartments to the costumes. The attention to detail in recreating photos is superb and DP Edward Lachman LIFE DURING WARTIME, FAR FROM HEAVEN) moves with ease from honey-coloured 1950s court-rooms to grungy beat apartments in black-and-white.
We also get an imaginative animated version of the poem that is inter-cut with court-room discussion of the same lines, and then Ginsberg reading them, or explaining them. All this adds up to a rich discussion and understanding of the text, although I personally could've done without the pictures - the words are enough for me. I wish they'd trusted more in the power of the words to carry our interest. The film is also populated with a fine cast of major names even in very slight roles - principally Jon Hamm as the prosecuting lawyer; David Strathairn for the Defence; Bob Balaban as the judge; and Mary-Louise Parker as a particularly amusing defence witness. These actors are all great, but in such small roles I found them to be more of a distraction, and wished that the film-makers had used character actors instead.
However, for all that, I still loved this film. It was an hour and a half of pure literary indulgence. And what really sets this film a cut above is the performance of James Franco as the young Ginsberg, with his perfect reproduction of that bizarre lilting way in which Ginsberg spoke and the physicality of how he carried himself. It was marvellous to see Ginsberg young and striving, rather than as the old balding man, established, that we often remember. Here he was - here the the Beats were - at the creation. It's exhilarating to watch. But a more interesting question is perhaps how far this film will translate to people who aren't as familiar with the poem. Will they be won over to its importance and artistry?  And will they find Ginsberg's speech patterns bizarre and off-putting rather than charming and particular? Evidence from my Gentleman Secretary suggests the latter.
HOWL played Berlin and Sundance 2010. It was released in Italy in August and in the the US in September. It opens in Denmark on November 25th. It opens in Germany on January 6th, in the UK on February 25th and in Finland on March 25th. 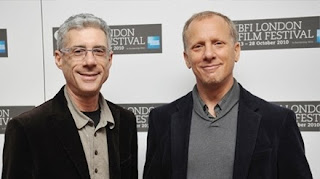