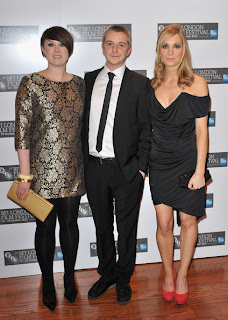 IN OUR NAME is the incredibly impressive debut feature from young British writer-director Brian Welsh. Shot largely by a group of ex-NFTS students typically on their first feature, and starring relatively unknown British character actors, the resulting movies stands simply on its merits - it's powerful, provocative, well-acted, and dripping with integrity. It's one of the most powerful films I've seen in the Festival to date, and easily one of the best films of the year. Apparently, it's getting a limited release in Curzon cinemas, and I would strongly encourage you to seek it out.

The story is set in contemporary Newcastle. A young mother, Suzy, comes back from Iraq, traumatised by what she has seen there. She comes from a family that has seen considerable military service, but she gets little sympathy. Her husband, also a soldier, is frustrated at her distance from him, and while the army could potentially offer therapy, Suzy is reluctant to ask for help when that could affect her chances of promotion. And so, Suzy is stuck in a nightmare - no help from family or the army - and increasingly paranoid that her little girl is in danger, and convinced that in saving her daughter, she will find her redemption.

Joanne Froggatt (DOWNTON ABBEY) is absolutely amazing in the lead role - utterly convincing, tremendously sympathetic - her performance is genuinely haunting - a word that is usually used lazily and as a cliche but really does apply here. But you also have to admire Brian Welsh's script and direction. In particular, I love the fact that he shows, rather than tells, and that he manages to portray complex situations with a very austere script. For instance, look at the way he handles inter-racial tensions in northern towns with large muslim communities. In just one conversation in the back of a cab, you get different viewpoints, and a sense of the extreme tension.

So, I don't do this often, but I repeat, IN OUR NAME is an important and deeply affecting film and you should go see it.

IN OUR NAME will be released by Curzon cinemas later this year.
Posted by Bina007 at 23:22