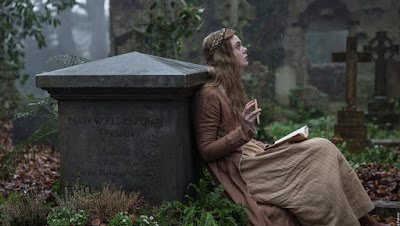 In 1816 a young woman called Mary Shelley created the story of Frankenstein - the "monster" created by assembling corpses and revivifying them with electricity.  It's a story of an innocent, faithful creature misused by the real monster, Doctor Frankstein. The monster is violent and vengeful but also displays more humanity than his creator.  The woman who created this story was not just sensitive and romantic with a capital R, but deeply intelligent, well-read in the classics, fascinated by science - an active participant in the political and philosophical debates of the day. Her reputation as a radical philosopher may not be in the same league as that of her mother, Mary Wollstonecraft, but her fictional creation has achieved more fame, and argued more powerfully for the radical cause. And yet history has diminished her - describing her more often as the scandalous girl seduced by Percy Bysshe Shelley, keeper of his artistic legacy, and almost by chance creator of a gothic masterpiece. Only very recently has she been subject to serious intellectual enquiry. And in this film I had hoped to see a similarly respectful portrayal of this radical woman.

The film is okay as far as it goes, but it doesn't go far or deep enough. It is very good at portraying Mary as a naive silly little girl who falls for a charming but vain and capricious seducer.  But it makes a fateful and disrespectful error in portraying her as being extremely passive. She watches and observes as men show her things - articles of galvanism or gothic paintings - which will work their way into her famous book.  But nowhere does it show Mary to be an active agent in her intellectual life.  There's nowhere that we SEE Mary as interested in science. We're just told by a bunch of male characters that she is.  The result is a heroine that is admirably free of cant, but one that is frustratingly passive. And it becomes very difficult to understand why she keeps returning to her emotionally abusive husband because he too is a pretty face. If there's no credible intellectual spark between the too, what's there to engage with?

That said the film is occasionally worth watching for the odd engaging performance - Tom Sturridge gets Byron exactly right.  But dialogue that is occasionally anachronistic, too conscious of the #timesup movement, and lead characters who are too thinly drawn, undermine the entire project.