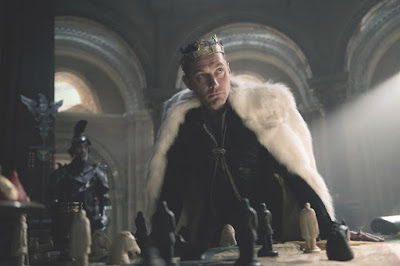 I massively enjoyed Guy Ritchie's retelling of the KING ARTHUR myth - it was funny, fast-paced, had some really superb visuals and a kinetic score.  It sets itself up perfectly for a sequel that isn't going to happen because for some bizarre reason no-one else liked it.  Close your ears to their whining and give it a go because it's stonkingly good fun!

In Ritchie's version of the tale, we have a mythical version of post-Roman Britain in which King Uther (Eric Bana) has been trained by a mage called Merlin and given a magical sword called Excalibur.  His evil brother Vortigern (Jude Law is superb cigar-chomping mode) kills his brother and seizes the crown but has one problem - Excalibur is stuck in a stone and he can't remove it.  He also has a second problem but he doesn't know it yet.  Uther's son Arthur (Charlie Hunnam) was saved as a baby and ended up being raised in a brothel.  The main action of this film sees him extract the sword from the stone, realise his true inheritance, struggle to accept it, but overcome this hesitation thanks to an ethereal Lady In The Lake, and save Britain from Vortigern's black magic.

So far so good.  I have no truck with purists saying that Ritchie has changed the story.  It's a story that is endlessly malleable. It's a myth from an oral tradition that takes some shreds of actual history and runs wild, and has done for centuries. I also love how Guy Ritchie gets certain things really right - the clash between the forces of modernity and the old beliefs in magicks - this is Britain  at a time of deeply contested philosophy - pagan vs Christian - Briton vs Roman - you name it.

Anyway, this is KING ARTHUR with all the energy, vivid characterisation, underdog energy and sharp dialogue of LOCK, STOCK AND TWO SMOKING BARRELS.  What's even more impressive is that despite all the jokes and lad-humour, the movie worked on a deeper level.  There's a particular character moment that actually moved me because I was so invested in the characters. And the way in which Ritchie imagines the Lady in the Lake is stunning. Of course there's also lots of cheap CGI and silly fight scenes but it doesn't matter - because I liked hanging out with this group of usurpers - I loved the moment at the end when order was restored and Goosefat Bill became Ser William again - I loved the diversity of the Knights of the Round Table, and I want my sequel GODAMMIT!