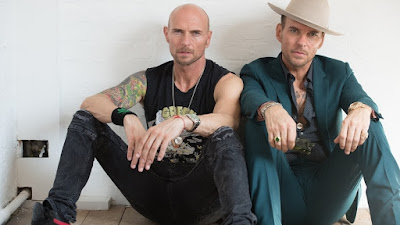 Confessions of a cine-blogger - I once was a Brosette!  This may mean nothing to millennials but back in the late 80s Bros was a massively successful teen boy band with an army of fans who all wore the same clothes called Brosettes. The band contained twin brothers Matt and Luke Goss - singer and drummer respectively - and a chap called Craig Logan.  At the height of their fame they were like Wham! was in the early 80s - but after three albums it all fell apart. Craig got ME and had to quit (although a bit of googling reveals he went on to have a successful career as a record exec and talent manager - hooray!) and then the twins fell out and the band was over. What this fantastic documentary does is show just how intense and crazy that sudden rise to fame is, and just how devastating it is when it's yanked away from you.  Luke describes how there just wasn't any money because it had all been tied up in the band, and how he had to ask his fiancee for her engagement ring back. It's a familiar story from many a teen band that collapsed and a story that I feel will be of interest to people who hadn't heard of the band before watching the film.

Once the band collapsed, Luke went on to work in film, featuring in Guillermo del Toro's Hellboy movies, and both continued to pursue music. The framing device of this film is to show the twins preparing for a reunion gig at the O2 - one of London's largest and highest profile venues. We see them in the rehearsal room with the pressure clearly getting to them - erupting into deeply bitter and personal attacks on each other. There's occasional humour in some of the pressure they put on themselves and the grandiose terms in which they frame their comeback, but the film never crosses the line of laughing AT them.  Instead, there's a deep vein of humanity of these two brothers, struggling to patch up their emotional relationship as much as their careers.  It's really fascinating stuff.

AFTER THE SCREAMING STOPS has a running time of 98 minutes. The movie will be released in cinemas on 9th Nov and to own on DVD/download on 12th Nov. There are still tickets available for 2 out of the 3 performances at this year's BFI London Film Festival.
Posted by Bina007 at 06:00