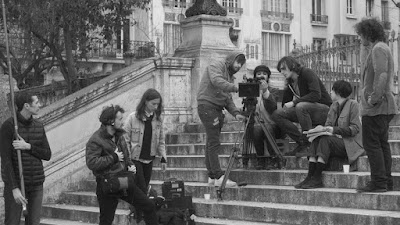 Sweet tap-dancing Christ, this film really is the most boring pile of pretentious wank. Sit around for over 2 hours and watch whiny French film students have apparently deep and meaningful conversations about Art while fucking indiscriminately and being arrogant and bitchy.  The central character in this film - Matias - is meant to be our hero - an uncompromising wannabe auteur of integrity who worships the greats. But in reality he's just a jumped-up arrogant prick.  And he is worshipped by the film's protagonist Etienne - the provincial rube of the title who goes to Paris to study cinema, even before Etienne has even met Matias. In fact, as many women as Etienne cheats on his girlfriend with, this is the real love story of the film. The problem is that while Matias is unlikeable, Etienne is a banal void - dull, reactive, artistically blocked so we never actually see him create anything.  What makes this talky, endless, actionless nonsense even worse is that it's shot in black and white and laced with a Beethoven-heavy soundtrack for no real reason other than its director Jean-Paul Civeyrac is as pretentious as Matias. And let's be clear, this is not that kind of crisp elegant black and white photography of films like MANHATTAN. Nope. DP Pierre-Hubert Martin's whites are never white, his blacks lack depth - the whole thing just feels muddy.  Quite like the mind of its characters.  Avoid at all costs.

A PARIS EDUCATION has a running time of 136 minutes. It played Berlin 2018 and was released in France and USA this summer. There are still tickets available for all three screenings at this year's BFI London Film Festival.
Posted by Bina007 at 07:00