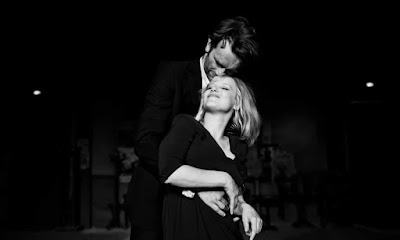 World War Two is over and Poland has fallen behind the Iron Curtain. The new government wants to create and train a troupe of singers and dancers to show off the Polish folk tradition. Charismatic and talented Zula (Joanna Kulig) cons her way into the school by pretending to be a naive fresh-faced country girl and becomes the star of the show.  The musical director Wiktor (Tomasz Kot) stays with the troupe despite pressure to include songs in praise of Stalin so that he can be close to her. They fall in love. They decide to defect. He goes, she stays. Why? Years later she marries and follows him to Paris and begins again as a jazz singer.  And yet something once again pulls her back to Poland, despite the risk of returning a traitor, and the double risk of Wiktor following her.

At its heart, COLD WAR is a story about the impossibility of love in a society of total politics. The personal is political in a totalitarian state - to admit of love is bourgeois - indulgent - diverting energy and devotion from the state. David Lean told the same story - Boris Pasternak's DOCTOR ZHIVAGO - but on an epic sweeping scale.  Pawel Pawlikowski's version is intimate, claustrophobic, concise, but no less visually stunning nor affecting. The black and white photography, the aspect ratio, contains the story while the lovers try to break out of it. It works beautifully. Both lead performances are perfect but it's Joanna Kulig that is the most memorable in what must be an Oscar-worthy display - a combination of Julie Christie's Lara and Anita Ekberg's Sylvia.  If anything trumps the performances it's the music - from full-throated a cappella renditions of folk songs to the jazz scene of post-war Paris to the tawdry mock-Latin pop of the 60s.  This truly is a remarkable film.

COLD WAR has a running time of 88 minutes and is out in the UK in cinemas and on demand. It opens in the USA on December 21st.  The film played Cannes 2018 where Pawel Pawlikowski won Best Director.
Posted by Bina007 at 06:30