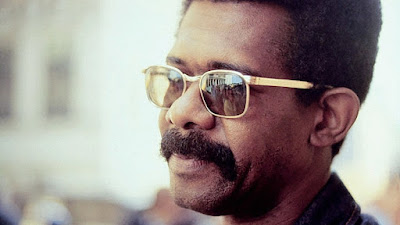 MR SOUL! is why I love documentary film. It's a movie that takes me into a subject that I had no knowledge of, gives me a rounded and intimate look at it, and leaves me with a passionate appreciation of its achievement.  It broadens my mind and uplifts my heart.  The only sadness is that the documentary's subject - the late 60s and early 70s african-american cultural TV show Soul, hosted by subversive icon Ellis Haizlip - didn't survive longer, and to my lifetime.  But maybe I should just be thankful it existed in the first place.

The story starts in the mid-60s where mainstream TV is dominated by straight white narratives and African Americans are depicted on TV as people to be pitied or vilified - victims of poverty or perpetrators of crime.  Into this space comes an openly gay black man - already something radical - called Ellis Haizlip. He starts a national PBS TV show out of New York. The show features proud, "woke" black people - demonstrating their talent in the sphere of music, poetry, dance, philosophy, literary critique.... That level of unashamed black pride is itself subversive and radical. But more explicitly, the show doesn't shy away from politics - interviewing James Baldwin and Miriam Makeba. Perhaps most significantly - but also eerily - we see Ellis interview Louis Farrakhan with an audience packed with members of the Nation of Islam.  Ellis tackles the homophobia inherent in their beliefs bravely.

The sad part of this story is that I can't think of something similar even in our time - a mainstream tv show where black culture is highlighted and celebrated and interrogated without being mediated by white media.  And it makes it all the more sad when Nixon tried to exert influence on the station to cancel the show that Ellis refused to go out onto the streets and protest. Instead, this seemingly amazing show ended and a beautiful moment was lost. Still, for the sadness of its end, I found this film profoundly inspiring, and hope that something similar can be fired up by the current generation of creators.

MR SOUL! has a running time of 110 minutes. The movie played Tribeca 2018. There are still tickets available for both screenings at the BFI London Film Festival 2018.
Posted by Bina007 at 07:30