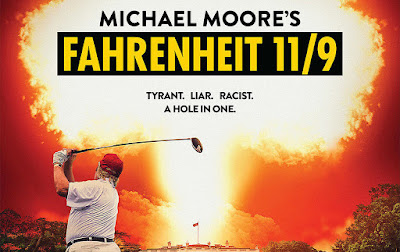 FAHRENHEIT 11/9 is Michael Moore's latest agit-doc, purportedly focusing on the damage that the Trump presidency has done to democracy and freedom in the USA, and the rising risk of despotism.  Moore makes draws an explicit parallel between Trump and Hitler, and even lends credibility to this hyperbolic statement by interviewing Timothy Snyder - a professor of history at Yale and one of the foremost writers on fascism in Europe in the mid twentieth century.  But for the most part - and surprisingly - this isn't really a documentary about Trump at all.  Accusations of collusion with Russia are handled in a throwaway sentence at the start of the film.  Rather, Moore is far more concerned with the structural dysfunction in American politics that allowed Trump to come to power - and spends as much time criticising the Democratic party and Obama as Trump himself.  In fact, I was shocked to find no exploration of gerrymandering or voter suppression by the GOP, but plenty of exposure of the DCCC annointing candidates and trying to cut those deemed too left wing off at the knees.  To be sure, both are problematic but it seemed weird to focus on the one without the other.  Both stymie the democratic expression of the will of the people. Moore is more balanced when he returns to Flint Michigan to expose the water crisis - excoriating Governor Rick Snyder but also the flaccid response of Obama.

The overall thesis of the film seems to be that Trump is just the most extreme expression of what the GOP does - which is to pander to the rich.  But that the Democrats have cleaved too far to the centre to try and win elections and have ended up being as corrupt and pointless as the GOP. He therefore shines his spotlight on the new radical left - whether that be Democratic Socialists like Alexandria Ocasio-Cortez - or most movingly the survivors of Parkland - who are tearing up the rule book and demanding radical change.

The result is a film that seems at times frenetic - jumping from one topic to another and then back again. But I admire the ambition to show how everything is joined up and systemic rather than just focusing on the egregious behaviour of Trump. That said, I continue to find Moore's stunts tiring - cheapening the force of his arguments.