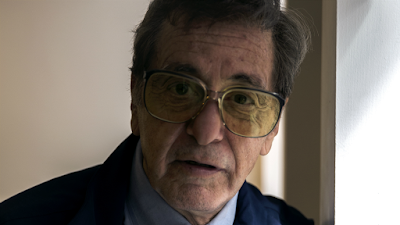 PATERNO is a superb TV movie about the impact of the Jerry Sandusky child sex abuse scandal on the legendary sports coach Joe Paterno - who was Sandusky's boss and became implicated in - at the very least not acting quickly enough when he became aware of the abuse - and at most - a cover-up. Paterno and his football programme had been responsible for elevating - arguably funding - their host university - and this film goes beyond looking at the personal emotional reaction of "JoPa" to the impact the scandal has on the wider community.  For British people, it's almost surreal seeing the seriousness with which college sport is taken in the USA and the riots that break out in Paterno's defense are quite shocking.  It is no wonder that this unhealthy elevation of a single aspect of college life to almost godlike status has created an environment in which the powers that be will be reluctant to besmirch the sport's character - even at the risk of child safety.

All of this is deftly handled and emotionally powerful thanks to assured direction by Barry Levinson (RAIN MAN) - an even-handed script by Debora Cahn (THE WEST WING) and John C Richards (NURSE BETTY) - and a powerful central performance by Al Pacino.  It's the first time in years that Pacino plays someone other than himself. Instead of the much parodied voice inflections and large character we get a Paterno who is old, unsure of himself, out of touch and both sympathetic and infuriating.  This ability to give a nuanced performance - to create a character that we feel deeply ambivalent about - is rarely seen but I guess Pacino just needs the material to motivate him.