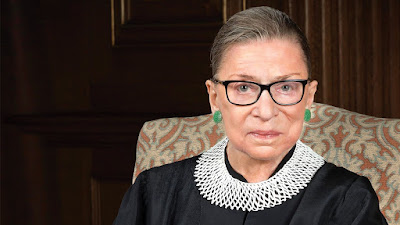 RBG is a superbly curated documentary about iconic feminist and Supreme Court Justice, Ruth Bader Ginsburg, now known by millennial activists as the Notorious RBG. Many of us know her as the diminutive, smartly dressed, bespectacled justice who has clung on to her supreme court seat through two bouts of cancer, refused to retire, and has consistently written progressive dissents as the court has drifted ever right-ward. This is all incredibly impressive, but what this documentary does is give context and colour to her judicial record.  In particular, I loved seeing her as a beautiful young debutante, really quite stunning, falling in love with her wonderfully supportive husband. How many of us would love such a husband now let alone in the 1950s! - a man who prizes smarts as well as looks and consistently supported his wife's career despite the many obstacles she faced and the insane work hours.  To the first, this documentary reminds us how hard it was to simply get hired as a lawyer in the 50s and 60s.  To the latter, we learn than RBG would often go to the opera and then return to her desk, working till 4am.  She had to be prised away from her desk to eat. One wonders how her kids felt about that but the family members interviewed all seem very successful, loving and proud of their "bubbie". As for her husband, the letter he writes her from his deathbed is utterly moving and one of the most authentic and touching moments of the film.

The documentary also shows us that RBG's fight for justice has been far longer than her supreme court tenure.  She was a key driver of challenging unequal laws, and in the words of no less than Gloria Steinem, made Gloria feel that the constitution finally protected her too.  We get context and personal anecdote from NPR's legal correspondent Nina Totenberg. And we get the sense of a better, more civilised time in political discourse. It's genuinely surprising but touching to see that RBG and Scalia - on opposite sides of the ideological divide - could have respected each other's intellect and ethics enough to be good friends.  And in the light of the Kavanaugh hearings it's amazing to see flashbacks to RBG's own confirmation, where right wing politicians say directly that they disagree with her but that she has an absolute right to be confirmed.

Altogether this is an insightful, moving and sometimes surprising documentary that gives added context and colour to a woman who has rightfully become something of a latter day superhero.

RBG has a running time of 98 minutes and is rated PG. The film played Sundance 2018 and was released in the USA last year. It is currently on release in cinemas and on streaming services in the UK.
Posted by Bina007 at 08:03