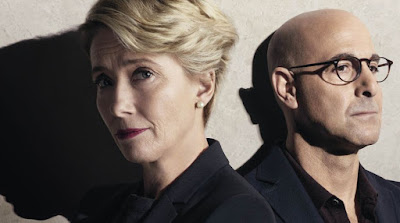 Celebrated theatre director Richard Eyre (the superb NOTES ON A SCANDAL) returns to our screens with his adaptation of Booker Prize winning author Ian McEwan's THE CHILDREN ACT. A stunningly good Emma Thompson plays a high court judge who has to rule on a case where parents are refusing their child a life-saving blood transfusion on account of their faith.  The ruling is made, and without spoiling it, the ramifications are emotionally intense, both for the teenager involved and for the judge.  The teenager is played by Fionn Whitehead, who starred in DUNKIRK, but has far more to do here, and is really quite impressive, holding his own against Emma Thompson in an intellectually complex role. Stanley Tucci has rather less to do in what is essentially a two-hander.

At first I thought this was going to be a rather sterile intellectual film, and the first half hour does take place mostly in court.  But as with all McEwan there's deep passion and provocation underneath that.  The film questions the idea of faith, the rights of children, and the sacrifice of family for career. It even questions the idea of judicial intervention and apparent neutrality. I found it to be a deeply stimulating film, and in its final scenes, profoundly moving.  I have no idea why Emma Thompson didn't receive wider recognition for her part.