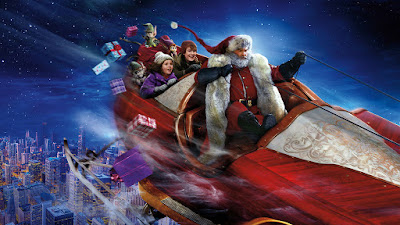 Netflix' children's Christmas release is a rare reminder of just how charming Kurt Russell is.  This overlong rather mechanical film is only saved by his presence.  It takes a very dull 25 minutes for him to appear on screen as Santa, after which the movie ignites - although it could still have lost 15 mins from both pre and post Santa segments.  The director Clay Kaytis (THE ANGRY BIRDS MOVIE) should take note.  The premise has two kids who lost their fireman father and fight with each other staying up to video tape Santa coming down the chimney. They actually do catch him but also damage his sleigh. So become some "high-jinx" as they have to help him find transportation and his sack of presents to make all the christmas deliveries and save the spirit of Christmas. All that - including animated elves - is so much blah - but I very much enjoyed the idea of Santa telling grown ups what they really wanted for Christmas as kids, Kurt Russell doing a jailhouse rock number, and a fun cameo from Goldie Hawn. We need more of this couple on screen.

THE CHRISTMAS CHRONICLES has a running time of 104 minutes and was released this Christmas on Netflix.
Posted by Bina007 at 13:04