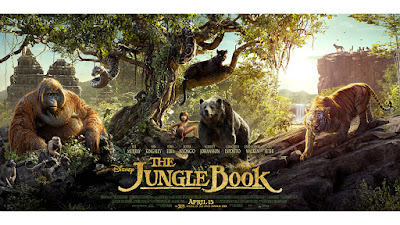 Disney's live action remake of its iconic animated classic is a triumph - a superbly executed mix of live action and animation and a respectful update of an old story.  I absolutely adore the original and was sceptical of the need for a remake, but found myself won over by this version's intelligent reworking, the beautifully rendered animal CGI, and the sheer charm of its lead actor, Neel Sethi.

As we all know, THE JUNGLE BOOK is the story of a young boy called Mowgli who has been raised by wolves in the Indian jungle. When Shere Khan the tiger (Idris Elba - suitably menacing) returns, he threatens to kill anyone who won't hand over the man cub to him. I love the fact that in this version we get more explanation of the tiger's hatred of man and fear of fire - he is battle-scarred from man's tiger hunts.  Accordingly the wolves hand Mowgli over to his friend Bagheera the panther (a perfectly cast Ben Kingsley) to take him to the man village. He rebels and runs away to be befriended by the hip bear Baloo (Bill Murray but I really thought it sounded like Bradley Cooper!)  They have a run in with a scheming ape (weird casting of Christopher Walken and yet it somehow works!) en route to a final confrontation.

If the casting choices really work well then so too does the reworking of the ending. I love the idea that instead of using Man's Red Flower to defeat Shere Khan, Mowgli turns away from the destructive violence of man and uses the group power of his animal friends.  That said, the decision to leave Mowgli in the jungle at the end of the film does feel like a cynical opening to a sequel.