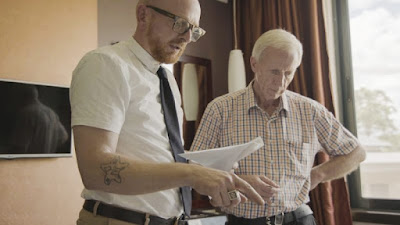 Mads Brugger wants to have his cake and eat it.  He wants to put forth a seriously argued documentary thriller in which he uncovers a sinister white supremacist plot to assassinate the second UN Secretary-General Dag Hammarskjold, because he was aiding African independence and thus a threat to white mining interests.  More than that, Brugger claims that the same shady, maybe CIA-funded, militia was behind an even more horrific plot to deliberately infect black South Africans with HIV, all in the guise of vaccinations. To make his case, Brugger uncovers black witnesses of the original plane crash who claim they saw a mid-air explosion - witnesses who claim a Belgian-British mercenary took credit for the assassination - and documents released during South Africa's Truth and Reconciliation Commission that apparently show the self-same plot to kill Dag Hammarskjold, and to infect black South Africans.

Some of this is persuasive. We know enough about the American and British intelligence agencies, not to mention white African militia, to believe they might pull something like an assassination off.  But following this film's premiere at Sundance, the claims of an infection plot have been thoroughly debunked. Apparently it's incredibly hard to isolate and weaponise the HIV virus with the kind of facilities they would've had at the time.

Even worse, the director destroys his credibility by making himself the subject of the doc - very much in the style of Nick Broomfield or Michael Moore - but even more goofy.  Maybe he's trying to make some deep meta point about colonialism by wearing a white pith helmet while digging up the crash site.  Maybe he's making a deep meta point by using inadequate tools and transparently staging the whole thing.  Indeed, the entire doc has a framing device of a white man (him) dictating to seemingly interchangeable African secretaries. If the point is to make a darkly funny joke about exploitative colonialism, then fine.

But you can't do that and simultaneously want to be taken seriously with your claims of plots.  And if you don't want to be taken seriously - but are just doing this all for laughs, then aren't you exploiting the death of Dag Hammarksjold for entertainment purposes?  I have to say that since watching this film I've done some research on this incredibly impressive man, and I can't help but thinking that his death was shady, and that he deserved a far better, and more serious, investigative documentary than this.

COLD CASE HAMMARSKJOLD has a running time of 128 minutes.  The film played Sundance 2019 and was released in the USA in August.  It is screening at the BFI London Film Festival 2019 in the documentary competition but both screenings are sold out.
Posted by Bina007 at 09:08